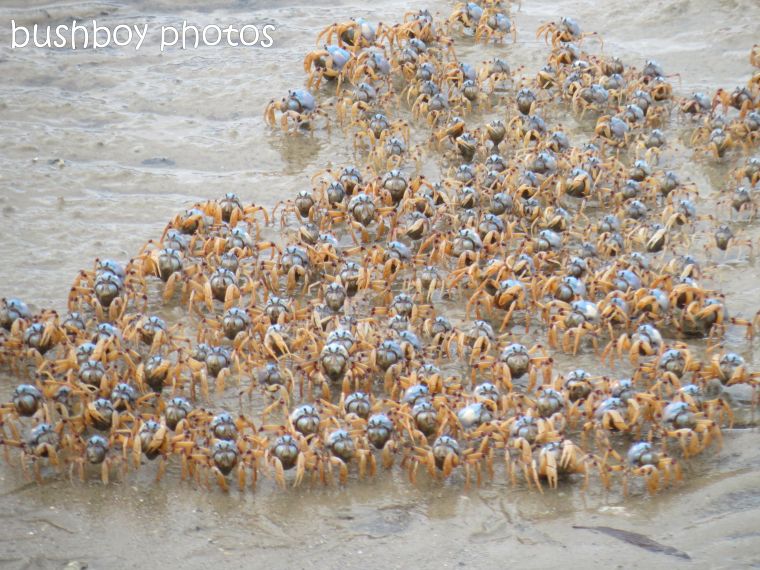 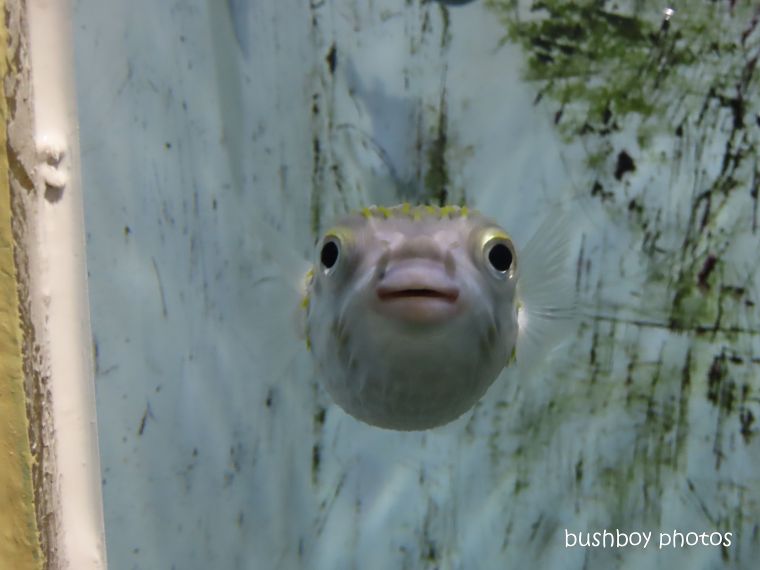 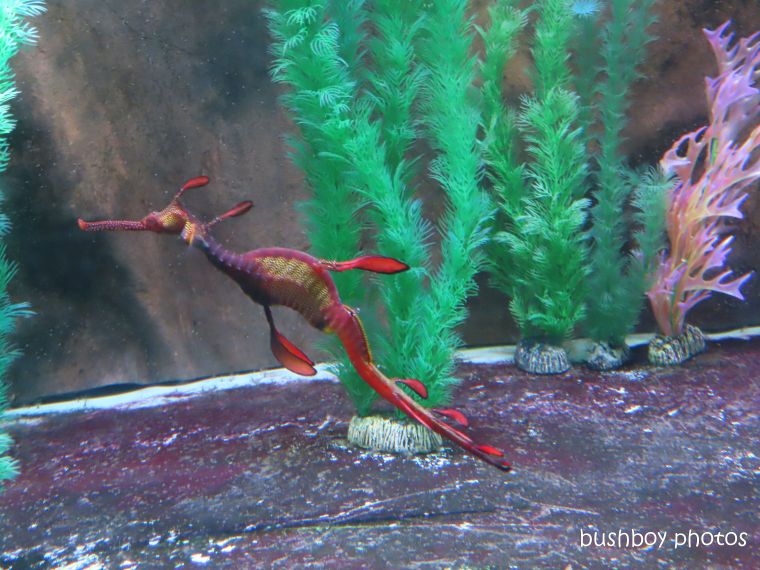 I think he is pregnant 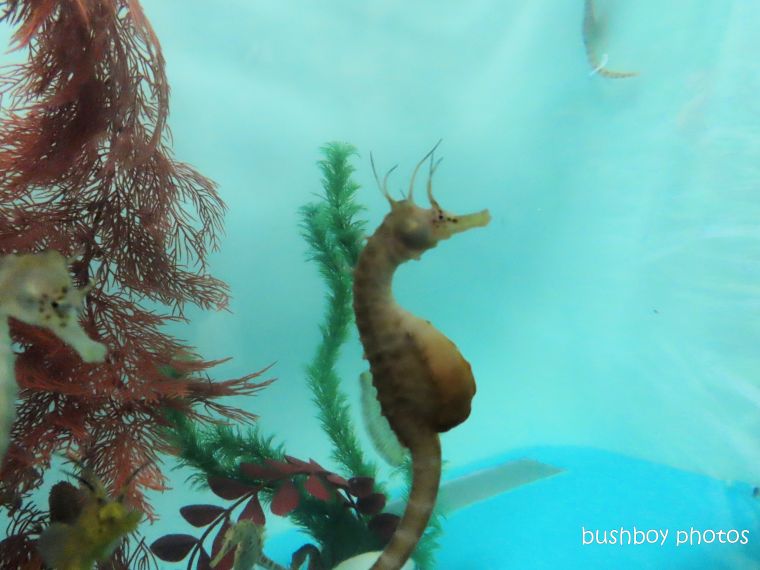 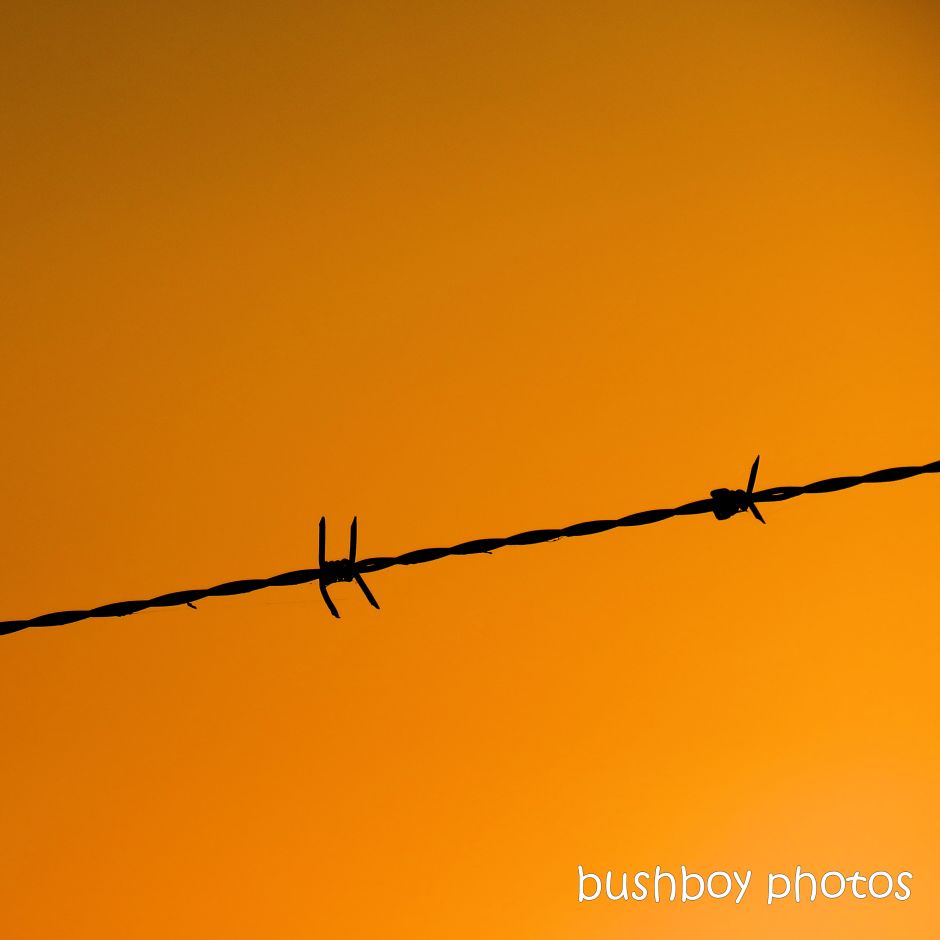 February didn’t see me taking many photos. I was feeling rather uninspired and a bit flat. A lot of things were happening and I think that a lack of rainfall was one of the reasons I didn’t get out and about finding new and wonderful things to share.

So this month it isn’t a case of getting a cuppa or snacks. I won’t take up too much of your time so scroll on folks

Perhaps this shopping cart sums up my month.

With the heat and lack of rain, the fire crews were doing their best to make sure everyone was safe. From my besties place near the airport, the fire crews and the spotting helicopter flew out every morning.

An angel of the sky, the Sky Crane does wonders in helping the ground crews put out the fires. We watched as it flew out in the mornings and back in late evening.

Enough of the gloom. Here’s a Koala climbing a tree. It looks like he has Koala shorts on too. 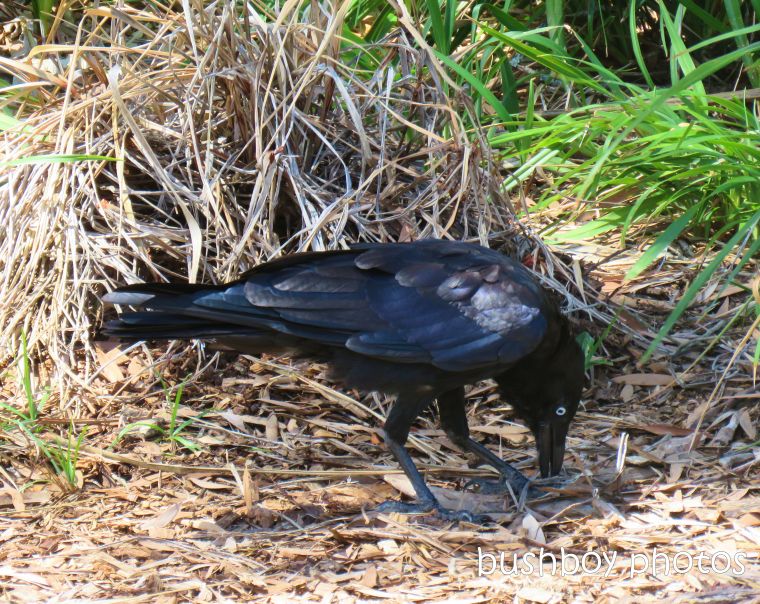 I had to include the inquisitive Pacific Heron who was frog hunting on my dam. 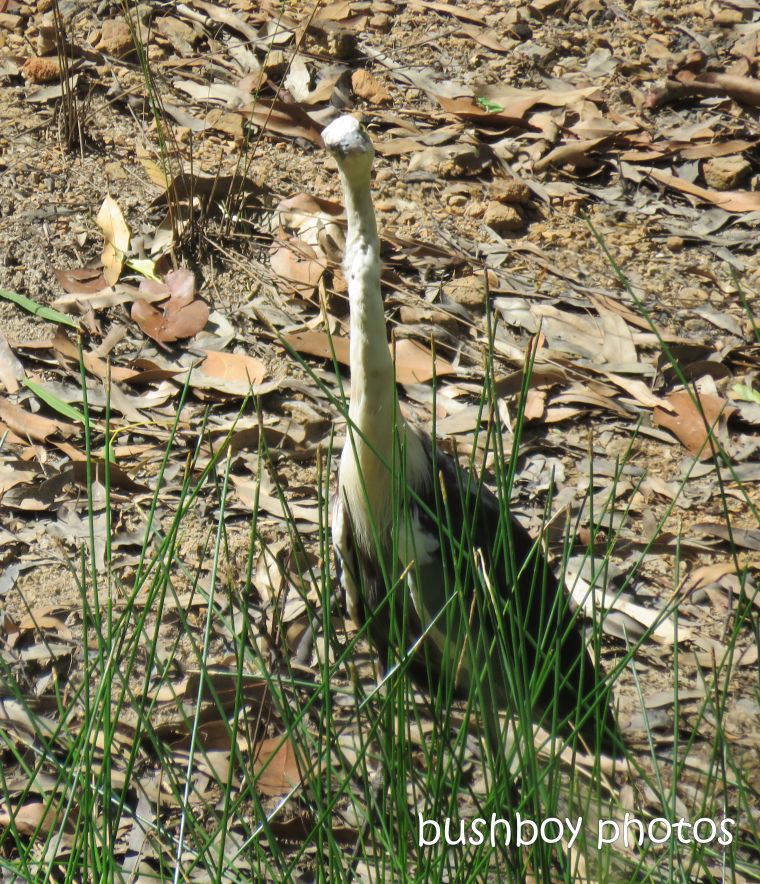 Up close a Bar-shouldered Dove looks quite pretty even if the wind is ruffling feathers.

Every morning and evening, the Ibis fly over the house either to feeding grounds or to their roosts. 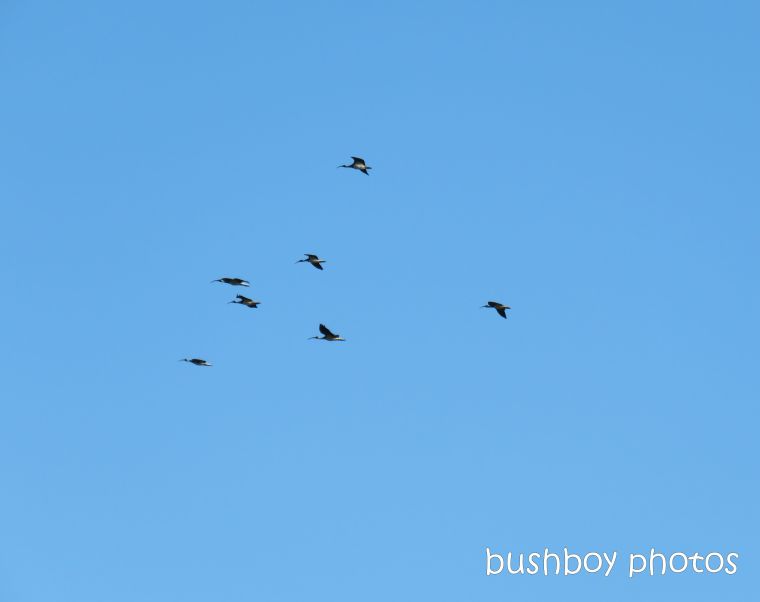 A Silver Gull takes a walk along the beach

There is nothing better that laying under the shade of a Pandanus Tree on a hot day at the beach.

Remember the little Sand Crab. Well here he is again

The little Blue-banded Bees are buzzing around the garden checking out the Pentas flowers.

Despite the hot dry weather, the butterflies are returning to the garden. The Orchard Butterflies enjoy the Pentas too.

At night, the outside Velvet Geckos hang around getting their snacks from the insects hanging around the light that spills from the house onto the verandahs. 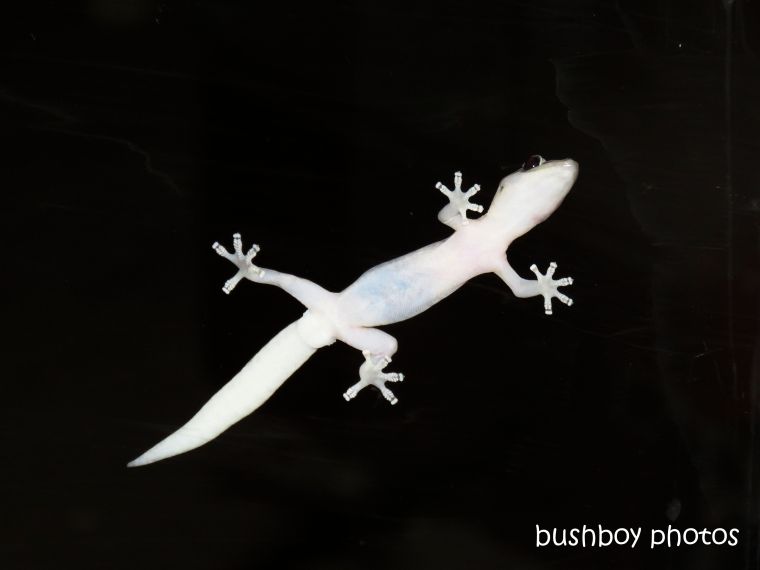 The Full Moon reflecting on the water with a rare rain shower at night.

I wonder if the mural or the lock on the door came first.

OK the sun is setting and here you are at the end already.

I hope you found a favourite

A while ago, I posted about sand crab art

On the weekend I actually had a Sand Crab, just near where I sat under the shade of a Pandanus tree, removing sand from his burrow. As this was the beginnings of the creative process, I didn’t capture the finished artwork.

He was quite busy coming and going tossing little balls of sand. The individual photos didn’t really capture the event, so I found a website that I could create a  GIF file of the event for you. This is the first GIF I have made.

So many patterns in this world it was hard to stop myself from just going on with too many photos.

The colourful patterns on the cliff face

The amazing patterns created by spiders 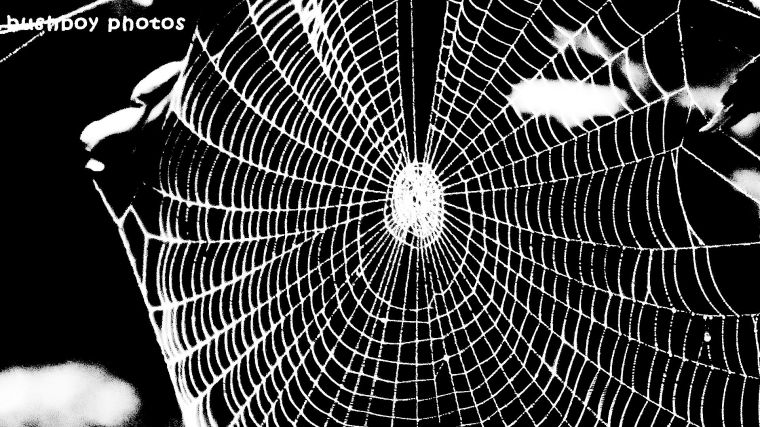 The reflection on the water make a very liquid pattern

The crazy cat pattern made by the bark of a Spotted Gum Tree.

Wonderful patterns made by Sand Crabs

The patterns on an aeroplanes tail

The patterns made by water lillies

Amazing patterns on the underside of a Yellow-tailed Black Cockatoo 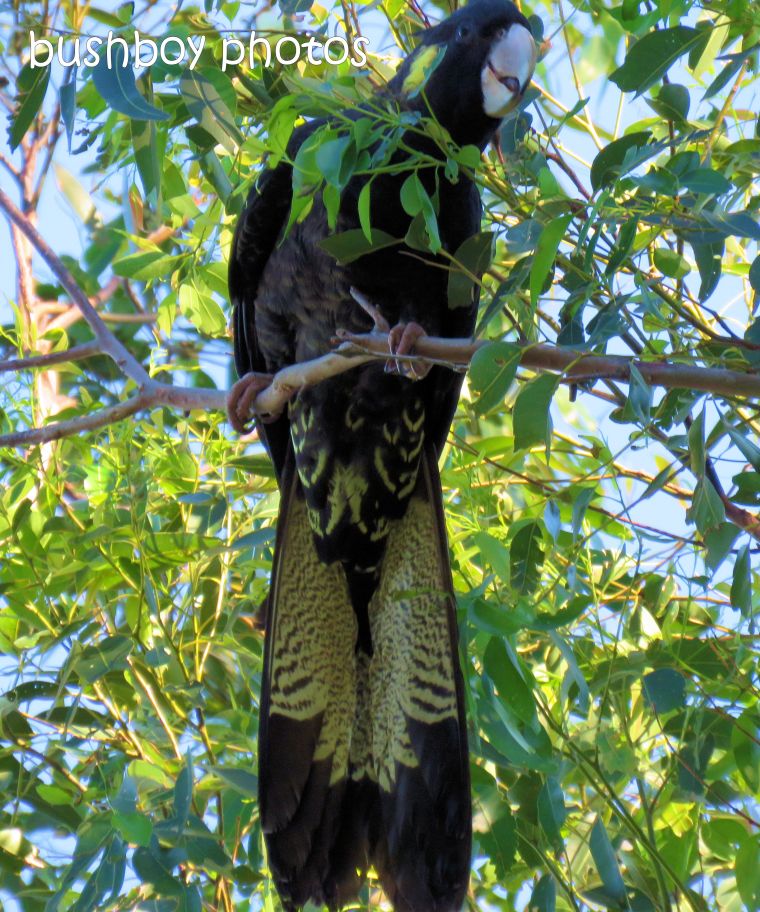 Fabulous patterns on the feathers of an Ibis 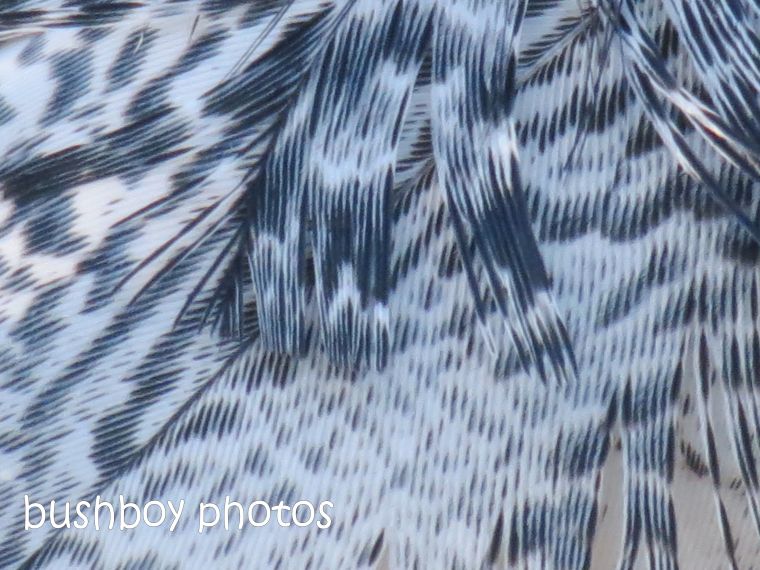 And of course, the wonderful patterns on our Moon

Sand. What a good subject for a photo challenge from Frank at Dutch goes the Photo.

Enjoy a selection of my things of sand 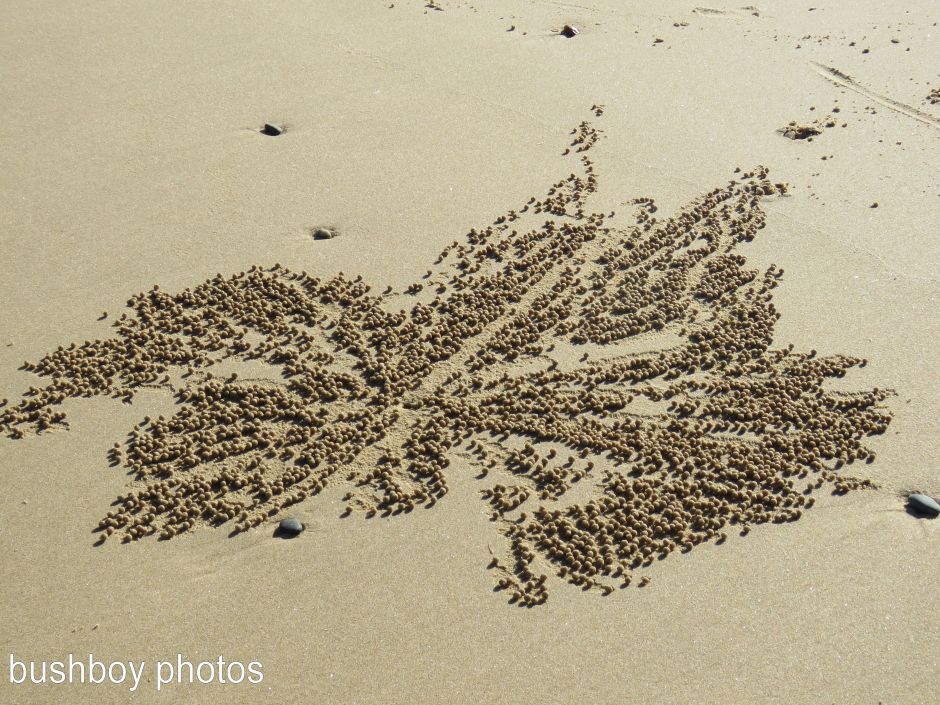 Everyone who goes to the beach will have seen the small balls laid out on the sand. I find them a wonderful expression of nature. None are the same although some are more elaborate than others. When we went for a walk along Emerald Beach on the Mid-north Coast of NSW, with all the other people who take advantage of a leash free area on the beach where the dogs can run free, I noticed that the small balls on the beach didn’t have any footprints in them. Perhaps there is a bit of respect for the creators of what I like to call Crab Art.

First of all have a close look at the sand balls. They do look rather random don’t they?

But some have a shape and form

Can you see the little roads? 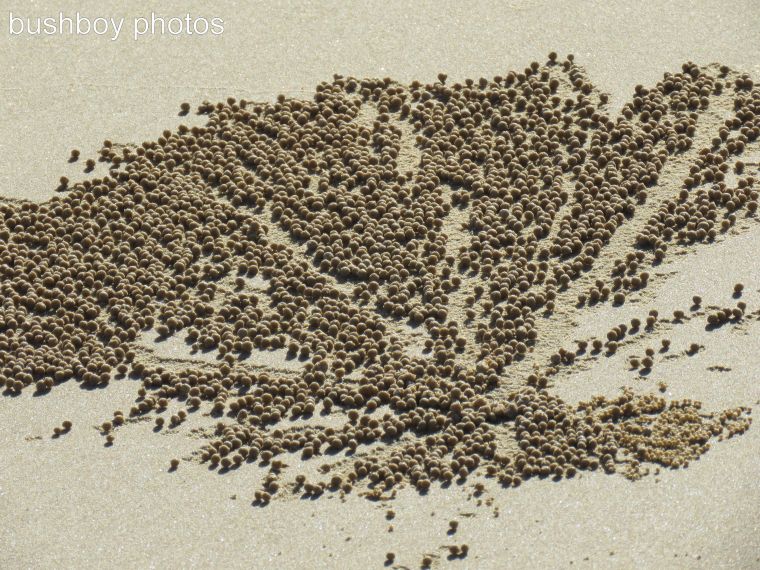 This one has a certain cartoon effect I feel. Can you see the face?

This is one of my favourites. Almost a butterfly?

From another angle you can see the little hole where the crabs “home” is.

You really should meet one of the Crab Artists. They are about the size of a finger tip. What fabulous blue eyes. 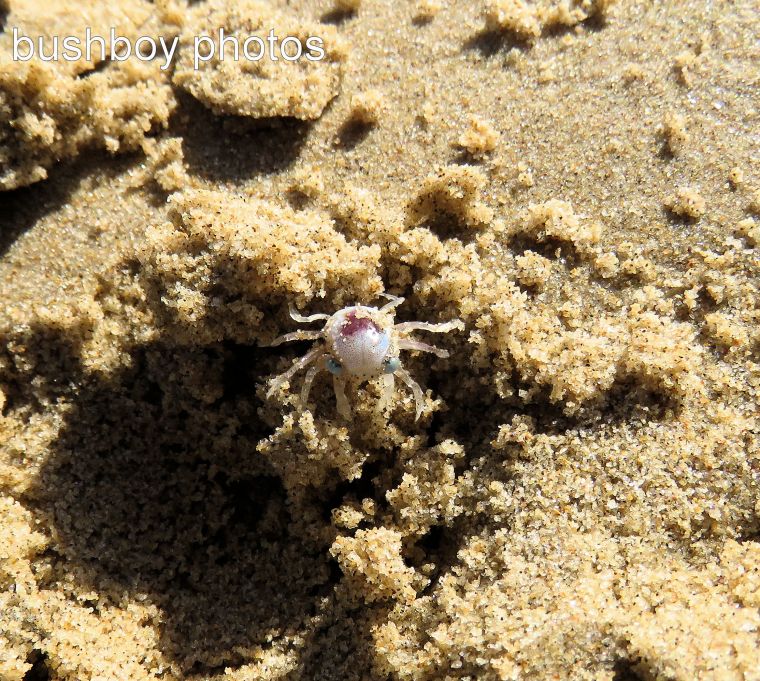 Do you think the crabs create art on the beach?

Many days have been spent at the wonderful beaches on the North Coast of New South Wales. There have been photos of sea birds, the coast line, waves, rock formations or the fabulous sunrises that we get when the sun rises from the sea. I am sure you have seen lots of this type of photo in many of my previous blogs or other peoples publications.

Want to come to the seaside with me? You won’t need sunscreen, a hat or other sun protective wear but maybe get a cool drink, settle back and let’s go….

Perhaps I should start with the obvious which you probably seen in many photos. Many of Australias beaches the sand is the shoreline but occasionally the beach is rocks. To me the endless rocks are fascinating and to see the colours, forms and textures is unusual. So let’s begin with the rocks, some rough but mostly worn smooth by the sand and water. 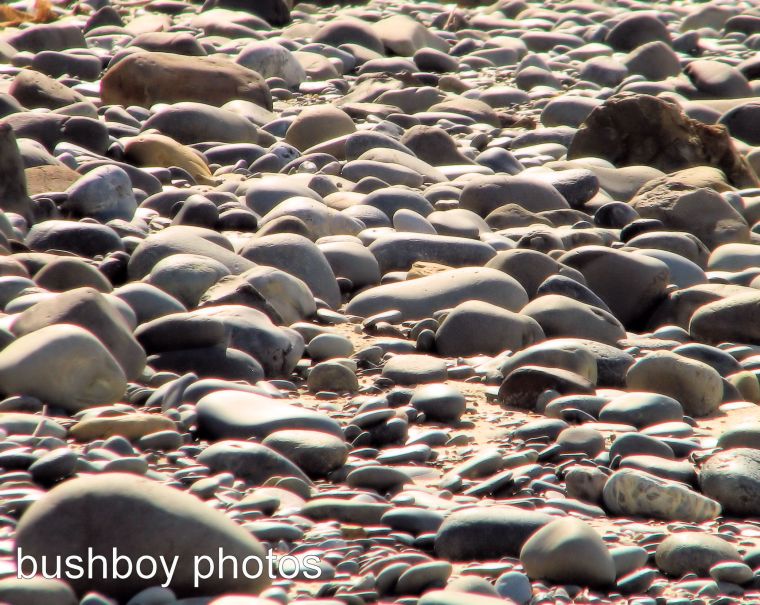 The Sand Crabs like to create their own art with shapes, textures and placement of the small balls of sand they excavate from their sandy holes where they wait for a snack to stroll past.

The water has it’s own way of creating art with the way the water flows back to the ocean leaving patterns on the sand. Can you see a fish or maybe a bird in the patterns? What do you see that perhaps I don’t?

Sometimes these patterns include shells to create parallel lines as they look as if they are zooming across the sand. 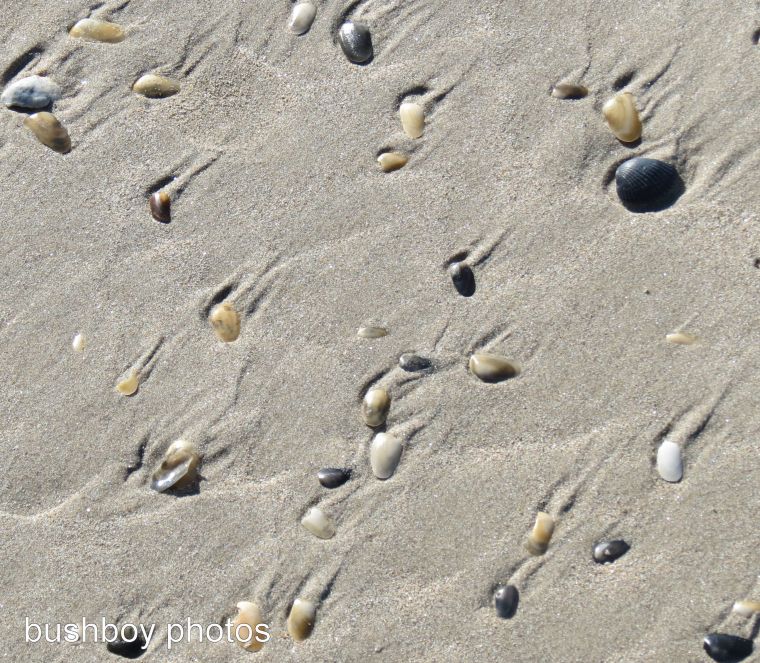 Shell are another source of wonder at the beach. How many shells have you picked up just to look at their colours and feel their textures? 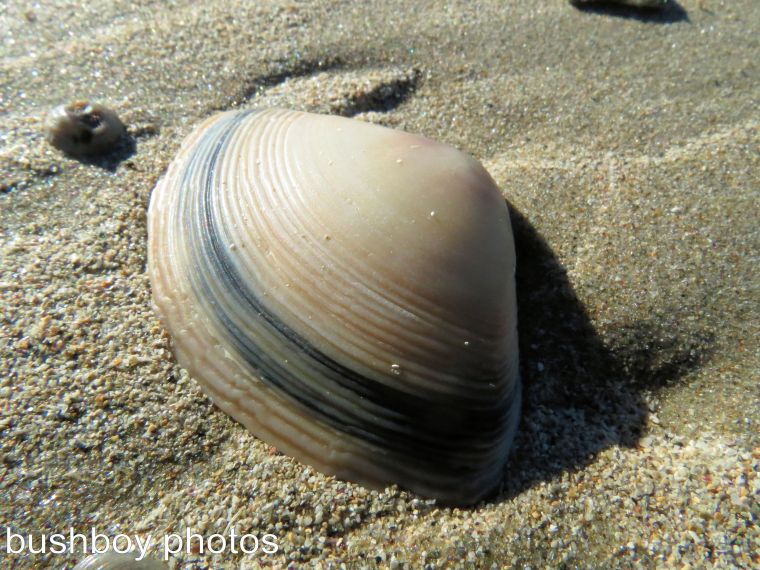 Even a broken shell can seemingly form its own mini sand dune.

Part of beach life are the things that get washed onto the beach. Sometimes these can be the result of a storm where seaweed has been torn from its anchorage ending up on the beach with its branches resisting the sands intrusion. 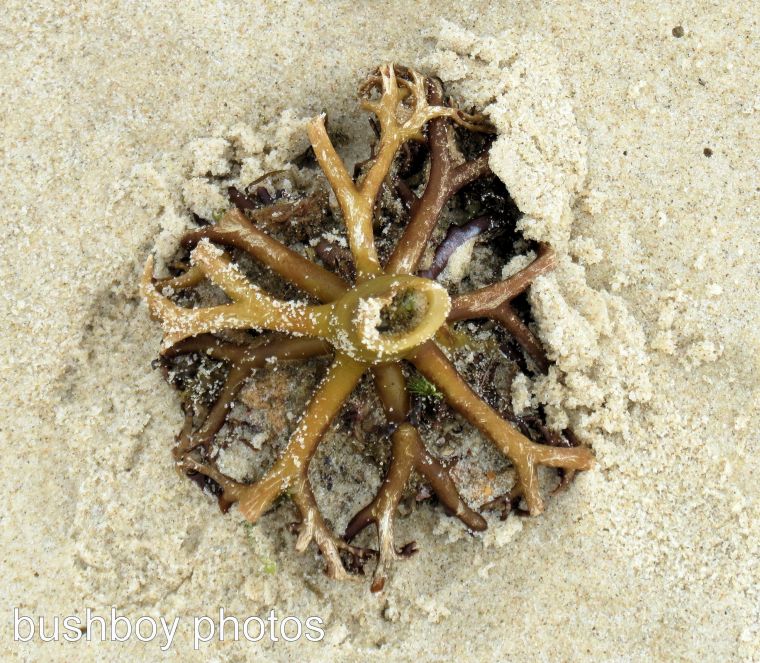 Bits and pieces on the sand.that show the life that is on the beach. From the terrestrial to the marine. The leaf from a mangrove, an excavation spread from a hole in the sand and other bits and pieces of marine vegetation. Each has it’s own place on the beach decorating the sand with artistic expression until the incoming tide changes the art installation. 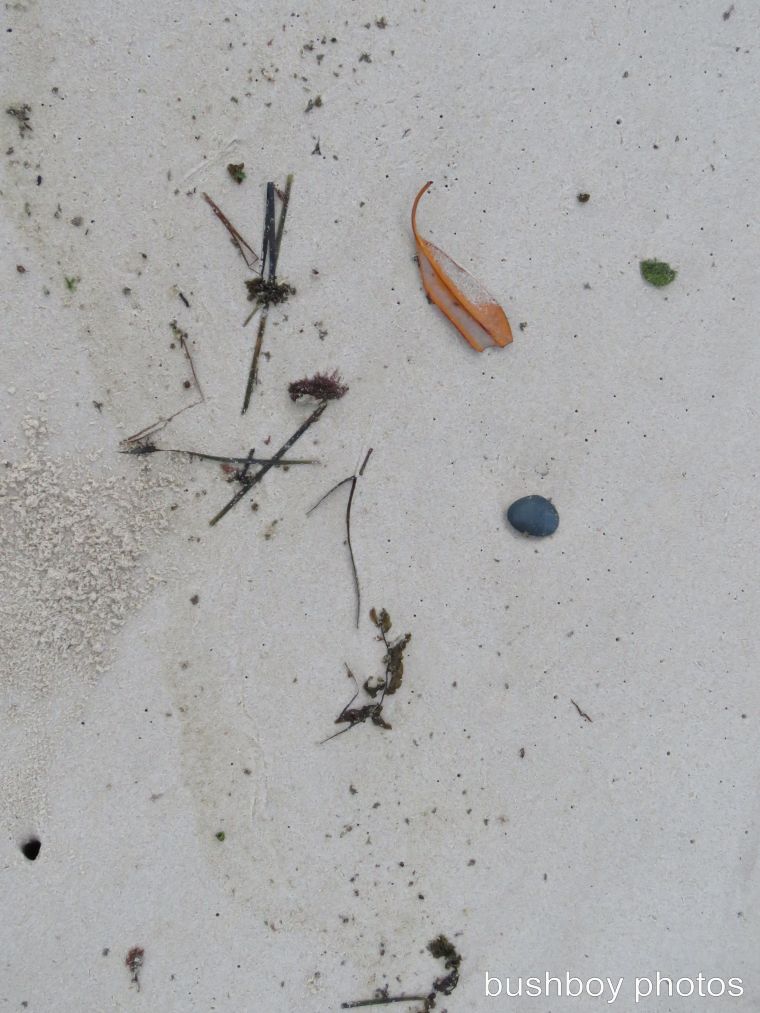 The orange leaf contrasts with the sand and other items that are washed in by the incoming waves. 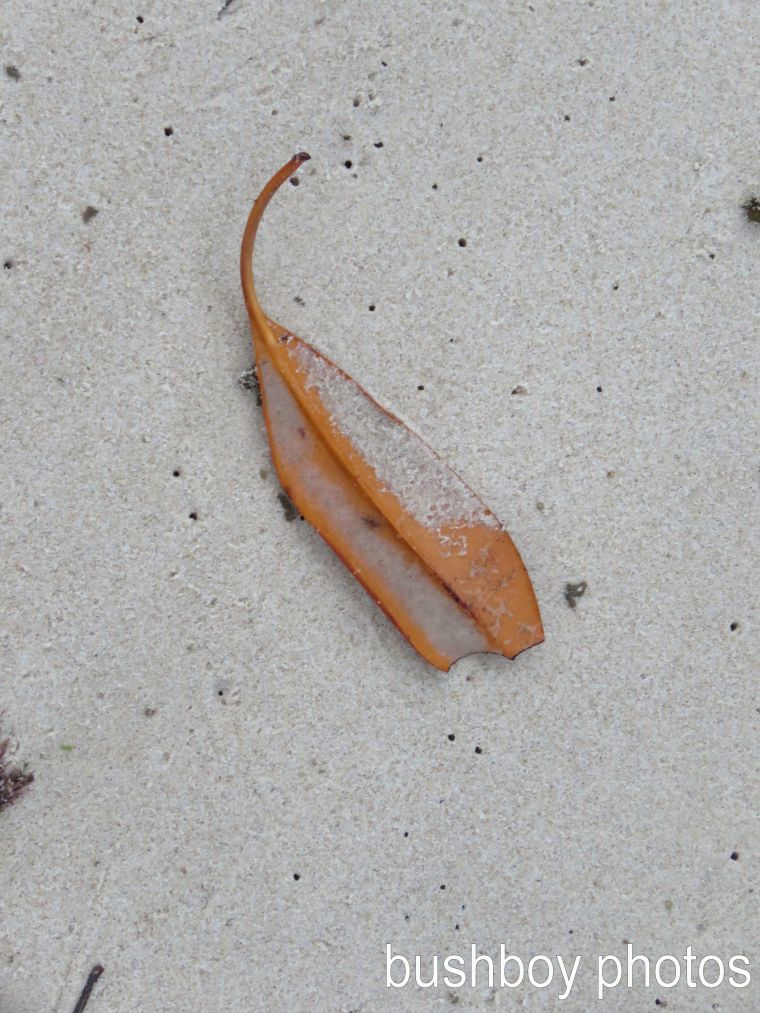 I love the way the colour of the sea-grass falls away leading to the blackness of the rock.

The interaction of colours and textures between the sea-grass and jellyfish with some bubbles added for more interest.

The entanglement of grasses and other bits of seaweed almost look like a bit of calligraphy. The imprint of some toes add a human element into the abstract art that nature has constructed. 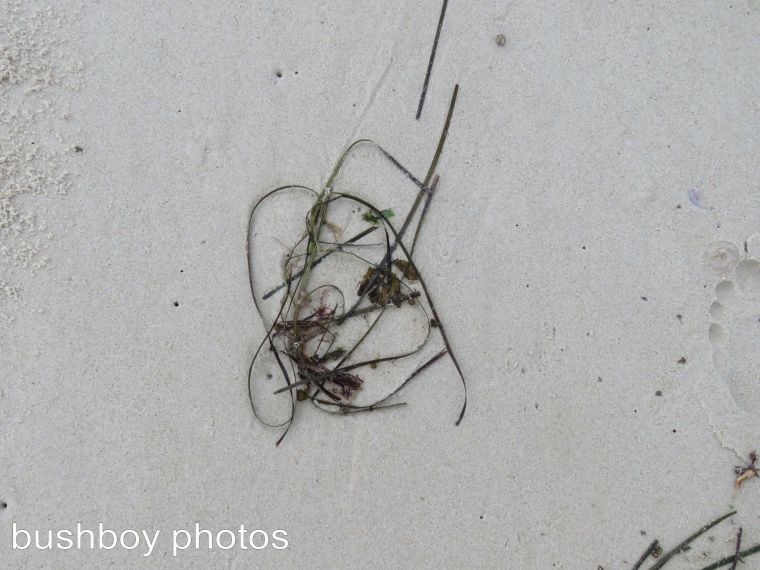 Sometimes the art that can be of natural construct includes the intrusion of humans or in this case, a child whose toy jet ski washed upon the sand. The impact of human detritus cannot be understated on marine life.

Sometimes a simple stick can seem like a stick. Look at the textures and the added colour of the coastal plants makes the stick more than a stick. 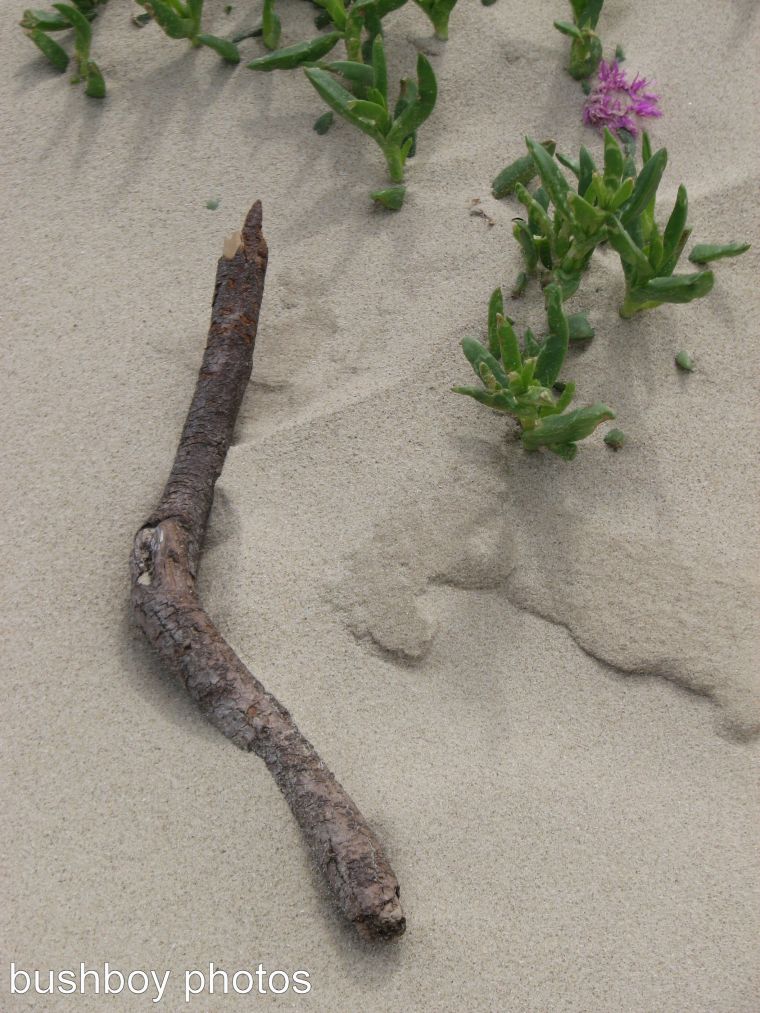 Speaking of making a stick more than a stick, it’s time we moved onto the imagination of two people who see possibilities of making life at the beach different. The things we do we leave behind and perhaps someone may smile as they come across the ideas that we enjoy to make together. When we find something on the coast as we walk about the beaches, dunes or the littoral rainforests and vegetated parts of the the hind dunes. The following is the combined effort of the imagination of two people who can see the ridiculous in nature that just needs a bit of enhancement to make the natural world a bit of fun.

We found some driftwood on the sand. The artist said “Look at the little man I found” and placed the stick on the sand. The photographer took a couple of photos and thought there needs to be more. Then the “footprints” were added.

When you walk along the sand and find some pumice that you would like to take home to use, well don’t you make a small basket to carry it in? 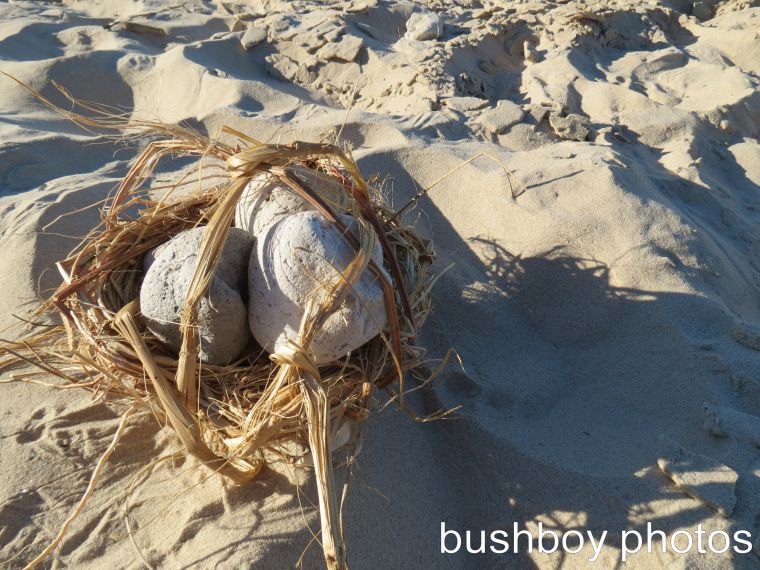 We both saw the vegetation beside the track and saw a shape. Add a few other things that were found nearby and a bit of modification, a bit of art was made. Do you see what the artist and the photographer saw?

A grass tree that had died provided a lot of amusement. I hope someone walking the track in the hind dunes had a laugh as much as we did making our hairy friend.

A Pandanus seed, a bit of red seaweed and gales of mirth led to this little bloke being placed in a paperbark tree beside the track. 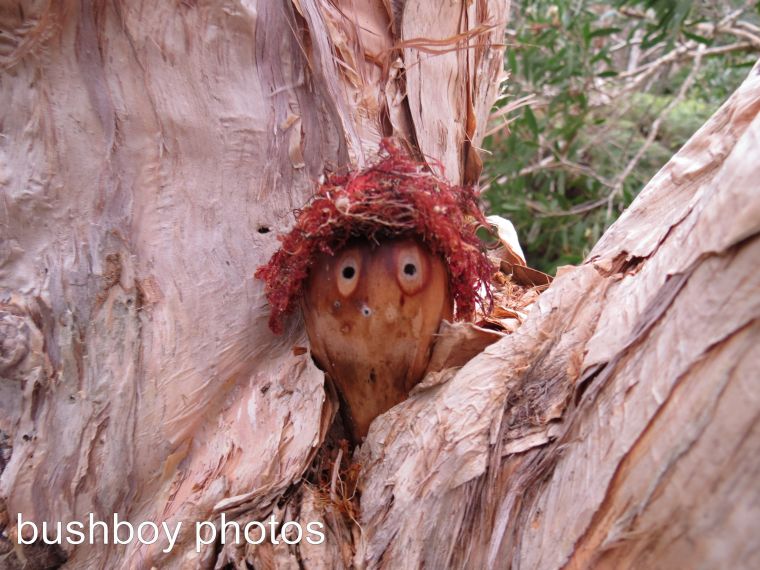 Did you enjoy having a stroll along the Australian coastline with me?

I have chosen a few photos from my travel folder for this challenge as well as the first two from my home, Australia.

Commanding – The view from the top of the pine tree

Coarse – The Sand Crab and his treasures

Gibbous – On the wall of the Notre Dame de Paris 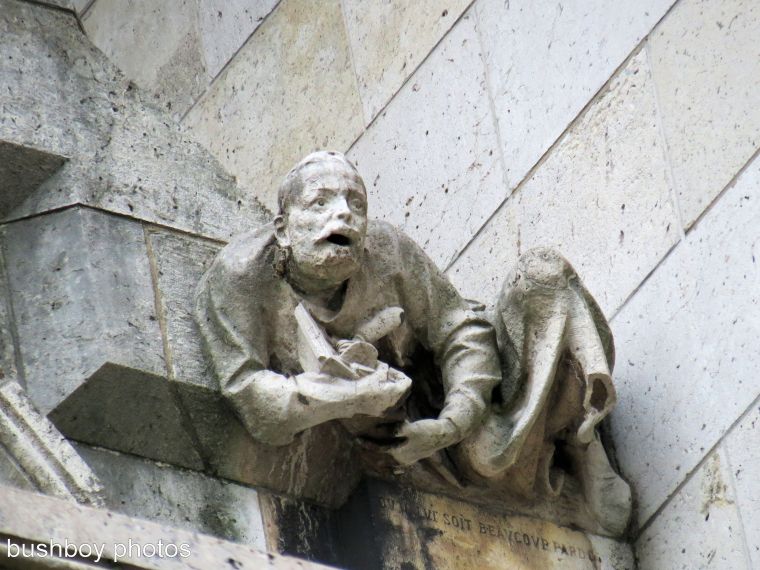 Incremental – A wall in the Grand Hyatt South Korea 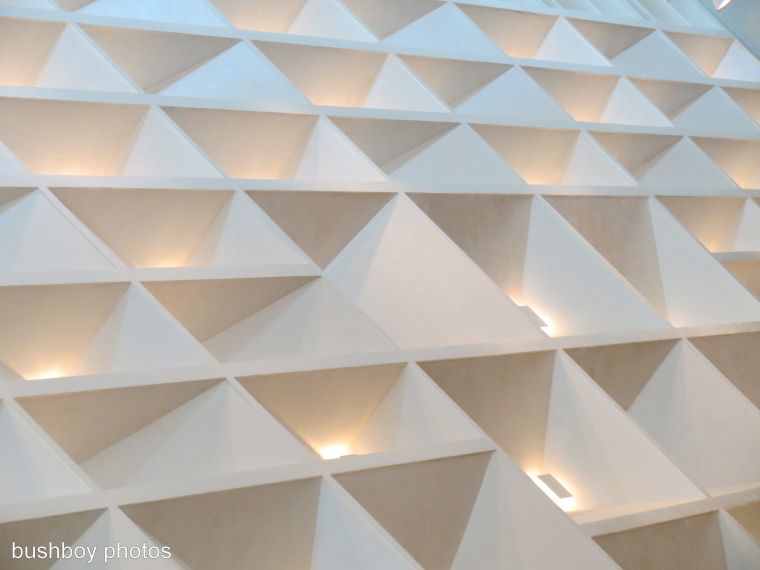 Indelible – The first time I saw the Segrada Familia in 2009 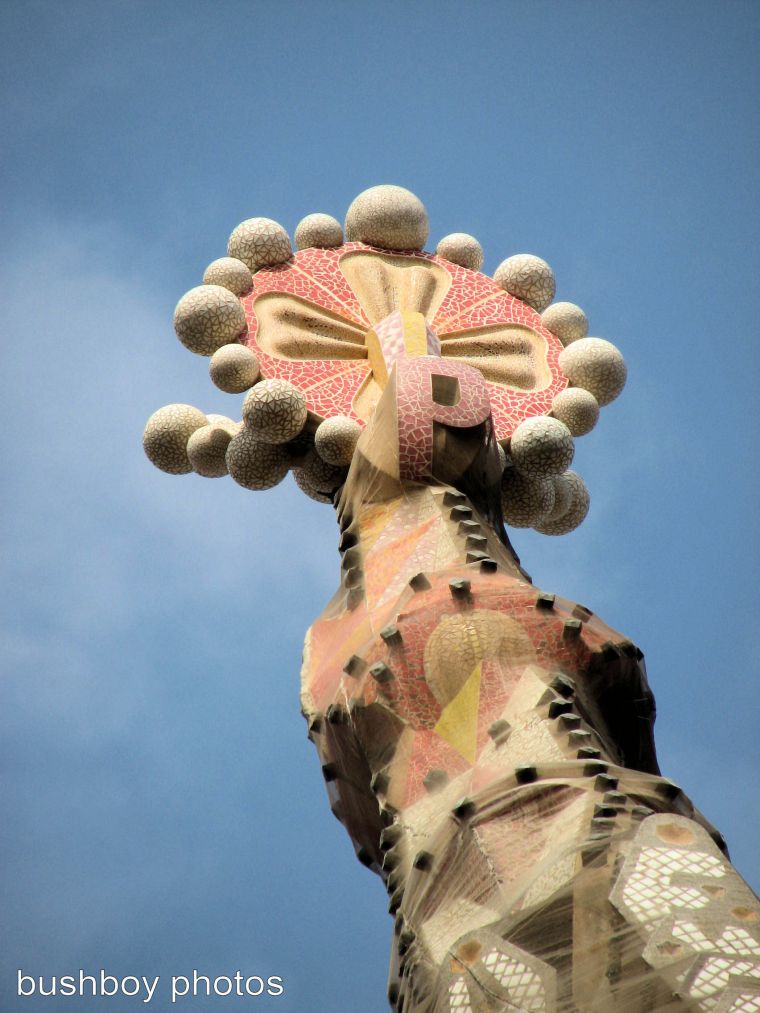 Thanks Paula for the inspiration and time to set the challenges.