One day, about a year ago, my bestie and I went to South Ballina Beach to have a pleasant late Autumn day in the warm North Coast sunshine. While we strolled along the beach we noticed a few bits of plastic so we thought we should pick it up. After a while we had gathered enough to have to find a place to put the rubbish we had picked up. Luckily along the beach I found a 20litre bucket so we had somewhere easy to put all we had found.
What we found was plastic. Drink bottles, some with foreign writing so we assumed they came from a freight ship or cruise ship out to sea, 4litre oil containers, shampoo bottles and my find of the day – a toilet seat!!!

Here is our find of plastic pollution that is destroying our oceans, or I should say has destroyed our oceans and marine environment. 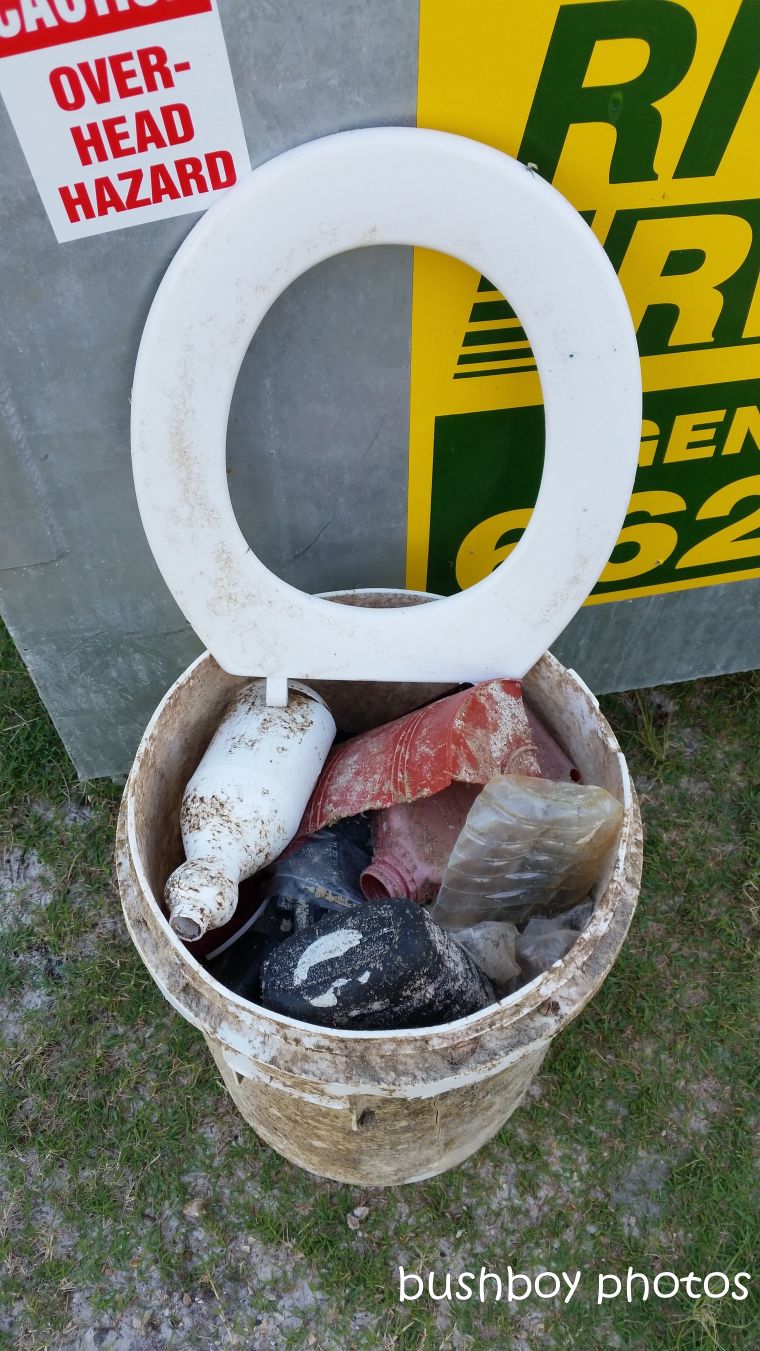 So how about when you go to the beach or to a park beside a waterway, pick up a bit of rubbish to help in your small way to help our planet 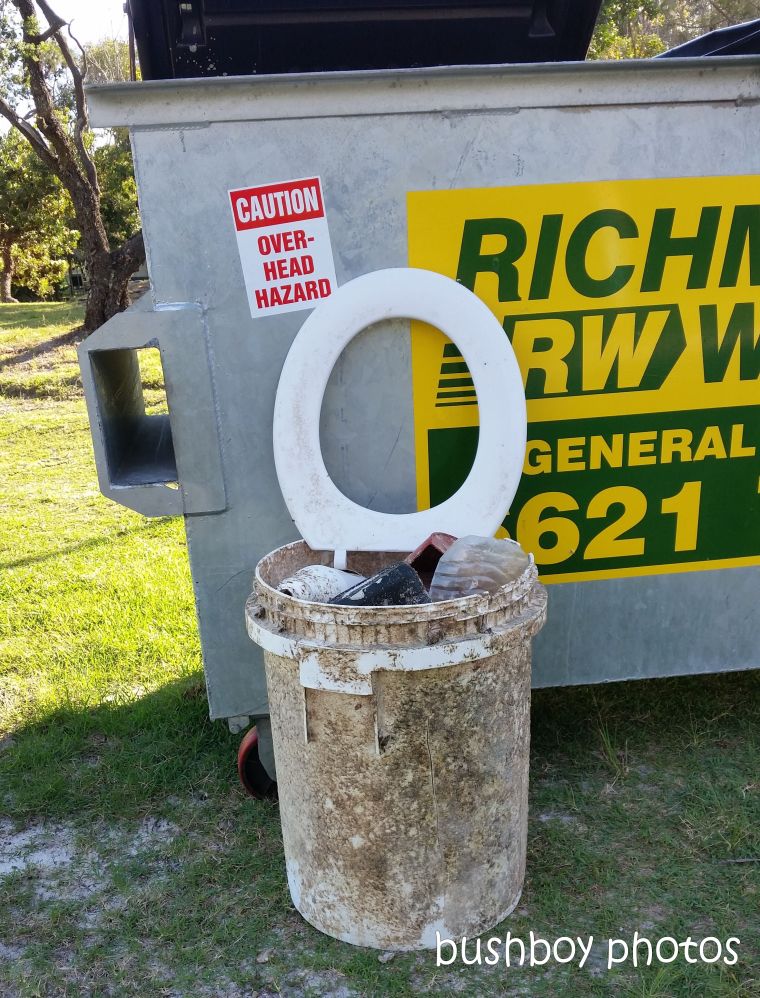 Sea Turtles eating plastic bags that look like jelly fish, plastic bottles and straws that break down into micro plastics and are ingested by all manner of marine life that fill their stomachs and are unable to pass through, leaving less room for their natural foods, microfibres and microbeads that are used in manufacturing that will always be in our environment. Bio-degradable is a myth unless it is produced from natural products.

There was an advertisement in the local paper, the Daily Examiner, in 1991 for expressions of interest in being part of a Nymboida Shire Council 355 Committee.

This committee was set up in the 1970’s to manage a small wetland on the outskirts of Grafton known a Cowans Pond. I drove past Cowans Pond every time I went to town and thought that I could help out planting trees, weeding and other activities. 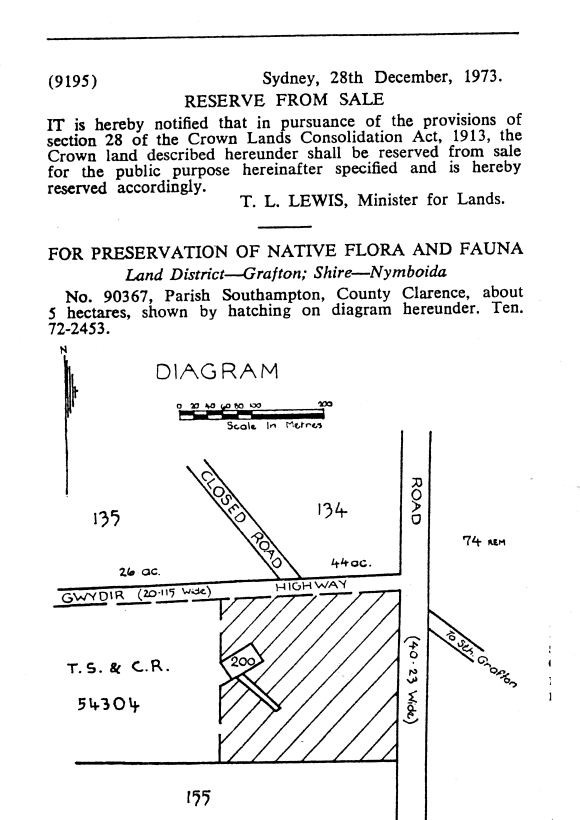 In 1992, I received a letter informing me that after an interview with the committee members, I was accepted onto the Cowans Pond Wetland Reserve Management Committee.

I had a young family and thought seeing that I had a bit of time as I wasn’t employed, I could potter around this wetland and make it a better place for not only the birds and animals  but for the people who would be able to share the space when things came together.

The first meeting was a decision to use a herbicide to control the water plants, Water Hyacinth and Salvinia. I voiced my concerns but the new boy was dismissed and the spraying of the wetland with the Diquat Reglone took place. I had commenced working part-time with the Dept of Water Resources, with duties involving water sampling, testing the water on-site and gathering water samples for lab analysis. With the various meters and water testing equipment, I did a grab sample and found that the Dissolved Oxygen in the wetland was ZERO. The decaying plants had robbed the water of the oxygen virtually rendering the wetland into a dead ecosystem. This result did surprise the Committee a bit but, as they already had used a dragline years before, knew that mechanical removal was expensive, around $5000, whereas spraying was just over $1000. Good side – the Salvinia has not returned to the Pond but the Water Hyacinth….well…..more of that later.

During the term of that Committee the cattle grazing still took place as the landowner donated land to the reserve and had a grazing lease. We managed to erect a small fence around the Pond, build Island for nesting safe from predators, construct a birdhide, a couple of picnic tables and plant about fifty trees and shrubs. Also the first time the pond had shrunk to a small waterhole.

As the Committee is tied to Local Govt elections, the old Committee was disbanded and a new one formed in 1995. It was this Committee where abandoning previous “rules” I was elected  (railroaded) as Chair, probably as I was the only member, apart from the adjoining landowner, from the previous Committee. I just wanted to plant trees not be responsible for the Committee.

This Committee sourced funding, moved fences to exclude the cattle and planted thousands of trees and shrubs with the assistance of people who were on Work for the Dole type of  employment programs. It was during this period that the Committee also became part of Clarence Landcare Inc. 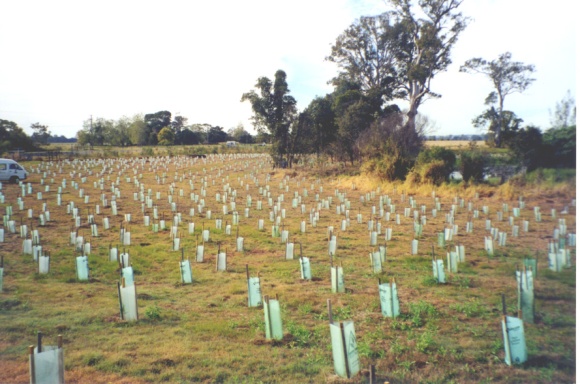 In around 2001, the Chair of Clarence Landcare Inc decided to step down and once more with a feeling of deja vu, I was elected (railroaded lol) as Chair. I just wanted to be part of the executive committee to try to help other Landcare groups in the Clarence Valley, not be responsible for the whole of the valleys Landcarers. Clarence Landcare Inc’s money plus other funding that came into Clarence Landcare at one stage totalled just over $1 million which was rather frightening but all was in good hands as the committee had/has some very experienced and capable people.

Now I am the Chair of 2 Landcare committees – how did that happen!!!

Also another drought hit the north coast of NSW

At the Landcare Muster in Tamworth I was only one of two north coast Landcarers when the decision was made to form LandcareNSW…….yep you guessed it….I was nominated to be the north coast representative. This time I was doing it for the Landcarers of the whole state!!! No, I have not been Chair of this committee (learnt how to dodge I suppose lol)

Being one of three representatives, I thought that it was time there was a coordinated approach to Landcare on the north coast and put wheels in motion to have a Chairs committee similar to the one that existed on the Tablelands for a number of years. This evolved quickly into what is now the North Coast Regional Landcare Network and through a teleconference of Landcarers, yep that’s right, I was elected (railroaded) as Chair. Now three committees had The Accidental Landcarer as Chair.

It has been a long twenty years involved in Landcare from all levels, the Pond planting trees, The Valley helping other groups, the Region trying to lobby for the whole coast and the State where it gets a bit more political.

Well I have decided that 2013 will be my last year being involved with so much. I have made commitments for this year which I will see out. I am feeling frustrated at many things outside of the world of Landcare. A State Govt which is trying to dismantle the environmental gains made over the past twenty or so years, a Federal Govt which doesn’t really understand Landcare and I feel is afraid of what we do and achieve.

I am proud of what I have helped build with the assistance of many many very enthusiastic and capable community members. It’s time to step aside and let more capable people take over as I have with the North Coast Network, still a Deputy Chair and North Coast Network Steering Committee member. Will stay on the Clarence committee to help with the change over and I cannot abandon Cowans Pond even though the Water Hyacinth has defeated me but will not stand as Chair for the next incoming committee but go back to weeding and looking after a special place – Graftons only wetland. 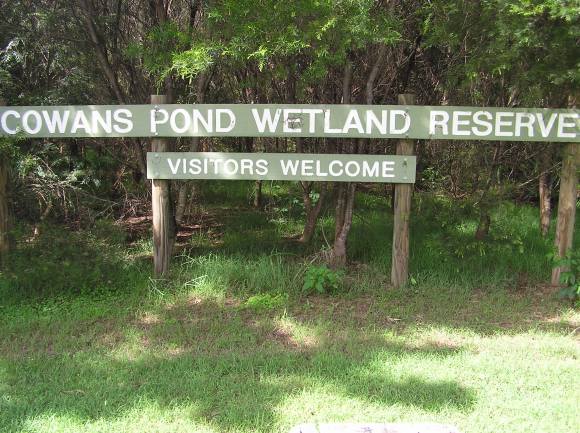 Do drop in sometime and if I am around, I would only be happy to show you around.