Did you have to wake me?

I am so tired 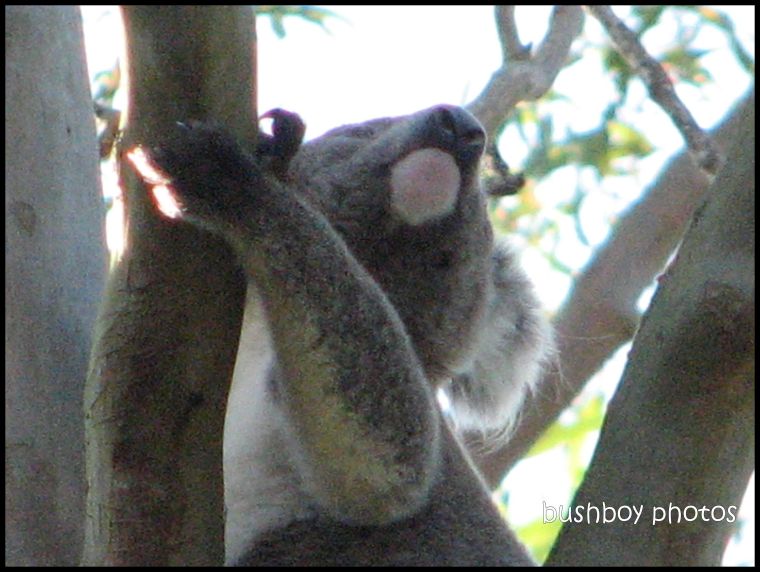 I really need to sleep 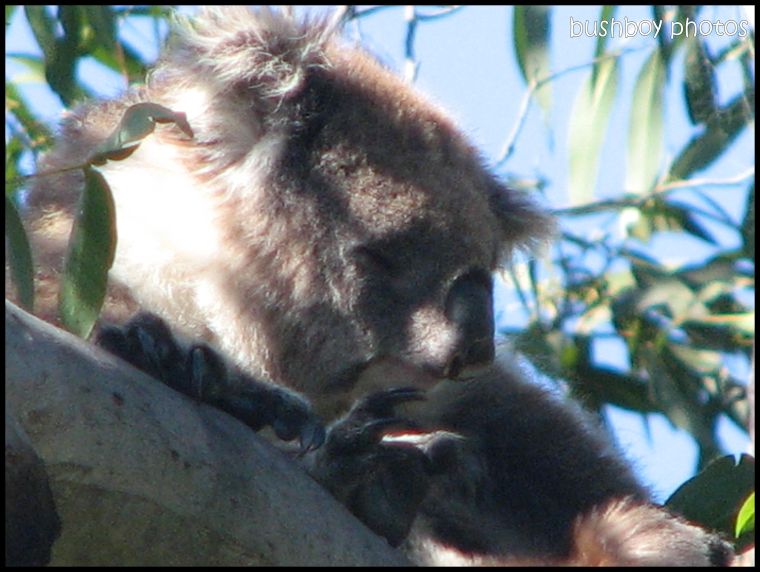 Koalas are not bears 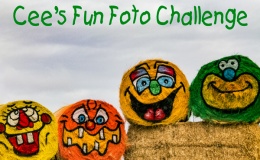 The word prompt from Frank at Dutch goes the Photo: Hills

This is on the road on my way home. This vantage point overlooks the valley where my property is, with the Great Dividing Range in the background. My place isn’t in the photos. It is further to the right.

Here is the many changes I have taken over the past few years coming home in the afternoon.

The mist in the valley

Sunset with a bit of heat 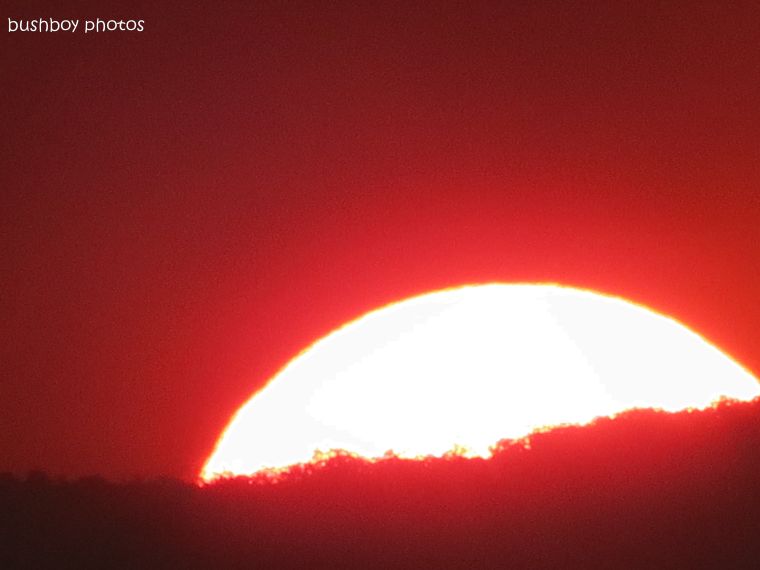 What is inside – What is outside. Something to reflect on

For this Traces of the Past, I recently spent a bit of time on a rainy day in the Cathedral Church of Christ the King in my town of Grafton NSW Australia. The Cathedral was finished in 1884. Originally there was a small wooden church on the site built in 1842. The Cathedral is in a great green space in the heart town with the bell tower ringing out the time, a tradition I love.

The hand carved foundations made of sandstone 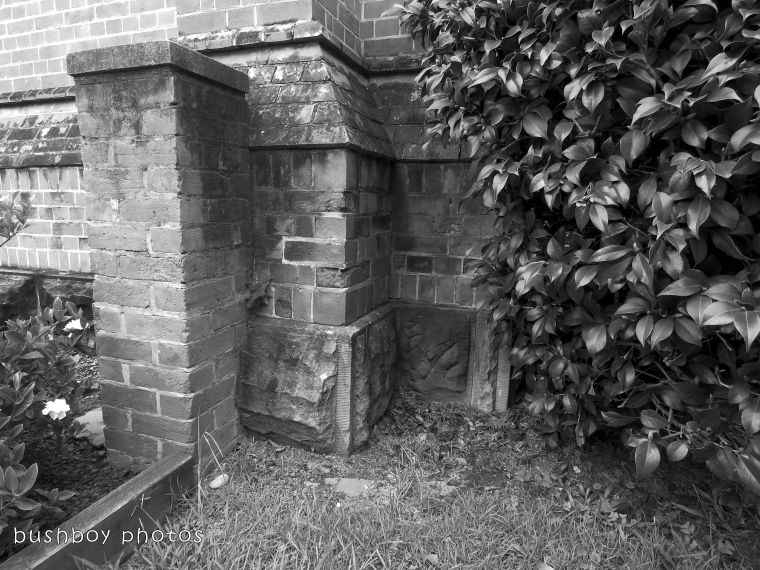 This side of the Cathedral has lots of lichen

The northern face. You can see the two halves of the church in the roof line where the second part was added

Looking toward the front door and the white roses in the garden. 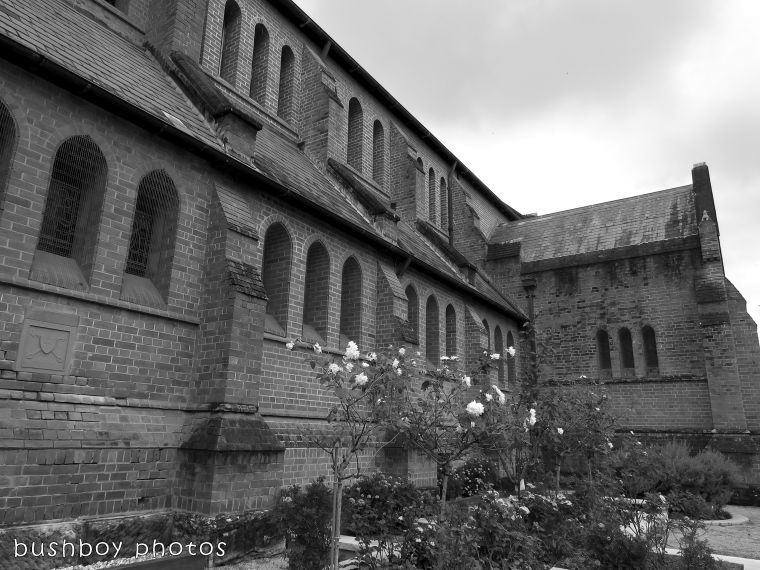 Looking towards the old bell tower 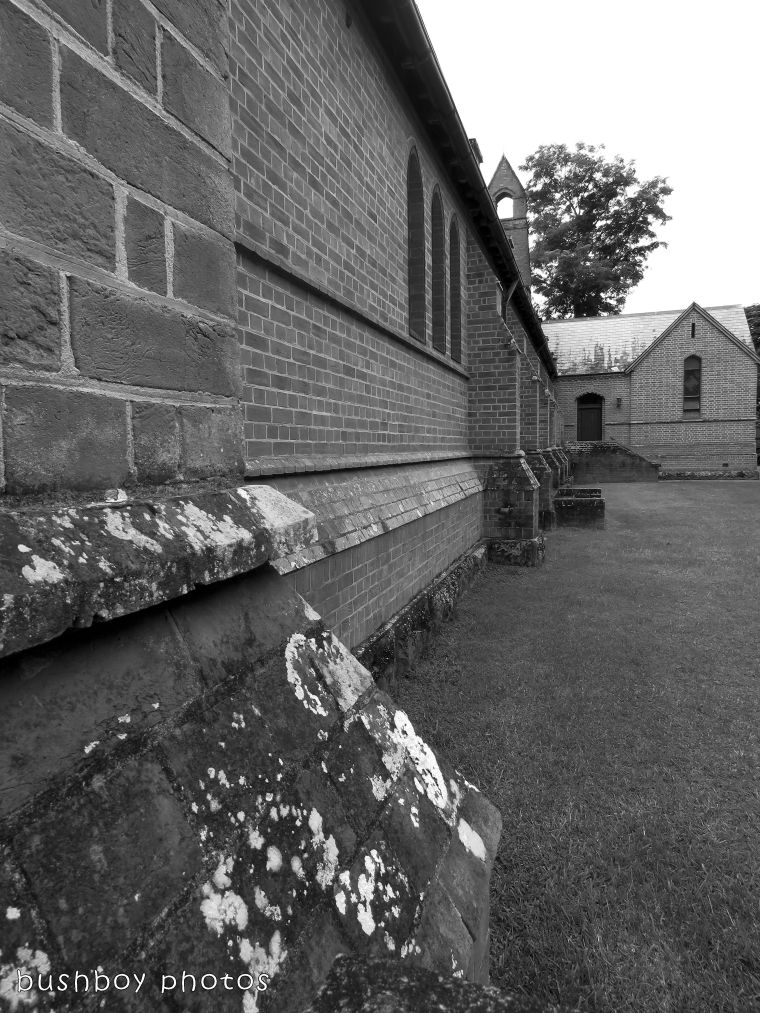 Looking along the aisle to the back of the Cathedral

The pews have been replaced by comfortable chairs with cushions 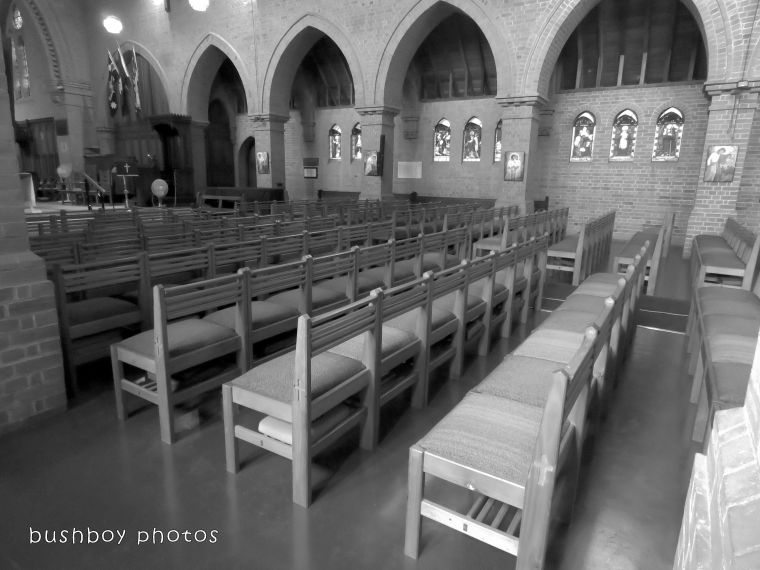 Some of the old pews have been retained

The font in front of the dedication to the Indigenous history of the Clarence Valley.

One of the brick arches that support the structure

Looking inside. Aren’t the lights lovely

A bit of selective colour 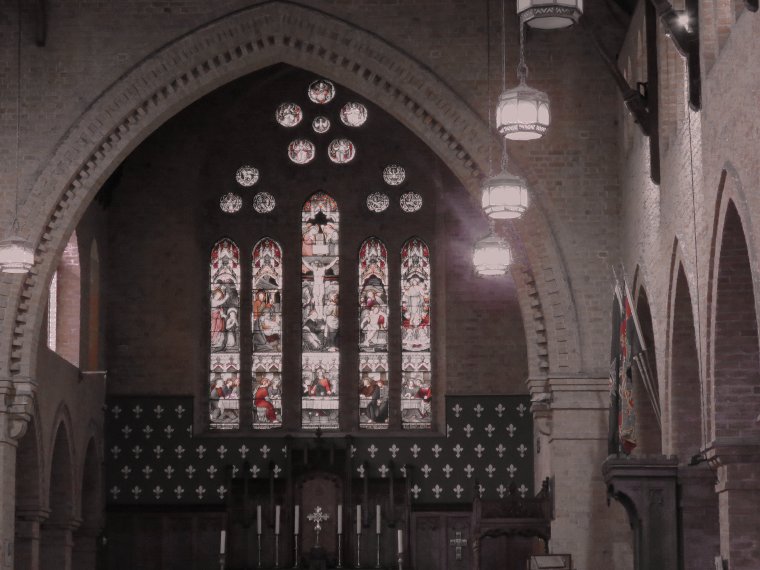 I couldn’t not show you the colour version

And of course I also had to include a bit of the nature who live around the Cathedral. You will always see a Skink or two on the walls. 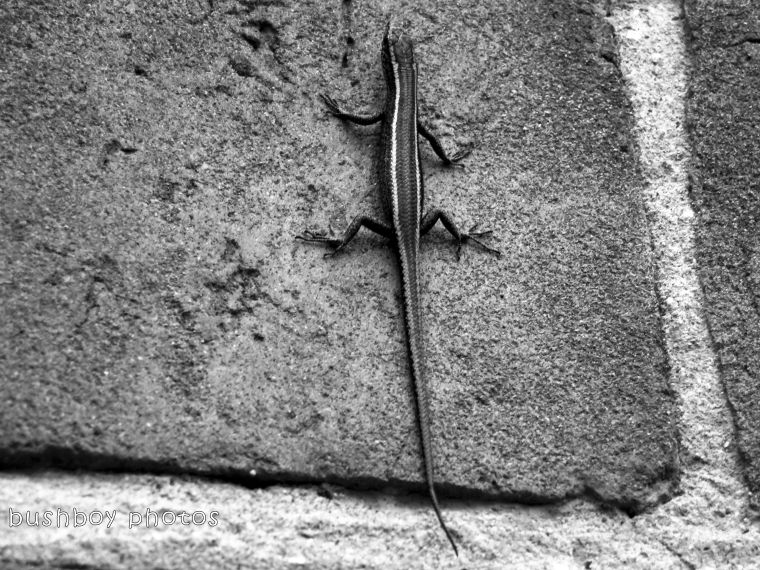 Hope you enjoyed a look around the Cathedral in my town.

A while ago , their real name is Ochrogaster lunifer or Processional Caterpillar, in one of her posts. Thanks to Becky at It caught my eye in Portugal for letting me know it was her post. Here is it here  I commented how my girls liked to make the caterpillar train go into a circle. Well, yesterday, driving home, on the road outside of my place, a caterpillar train was crossing the road. I had to stop to make sure they got across the road safely, albeit with a slight detour.

The caterpillar train stretched around three meters across the road

The leader seemed to know where to go.

They march nose to tail. Wouldn’t the one in front tickle your nose?

“Somehow” the leader “wanted” to join in the train somewhere

You aren’t allowed to push in the train. 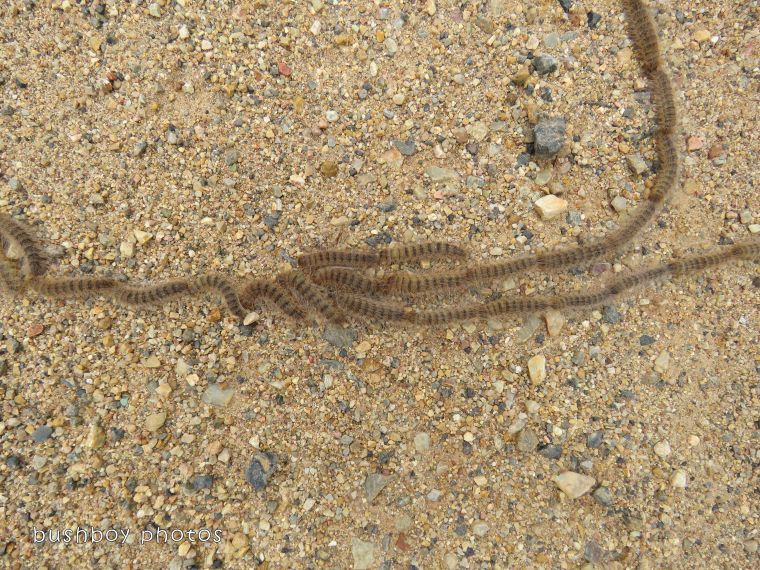 Once you are out, it is hard to get back in. 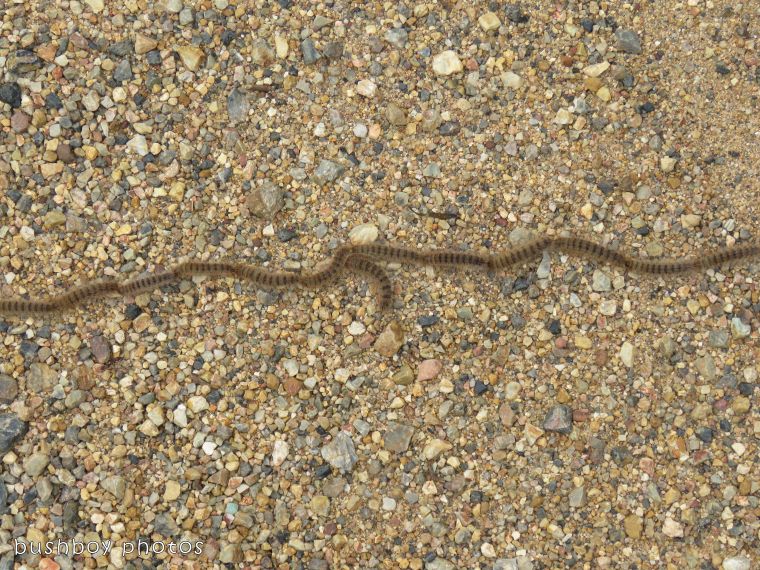 They do try to find some semblance of order

I am sure they were trying to elect a new leader

They are really hairy aren’t they? 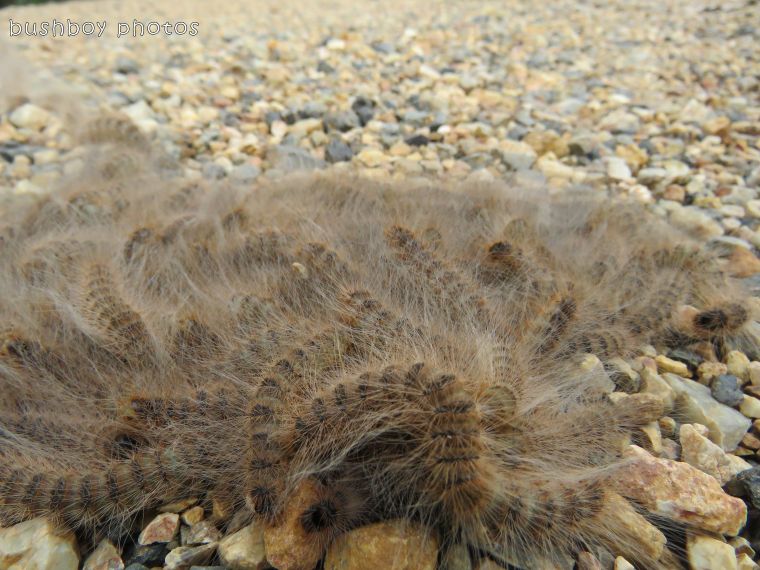 Election over, the leader decided to get the caterpillar train back on track to find a Fringe Wattle, their favourite food on my place. 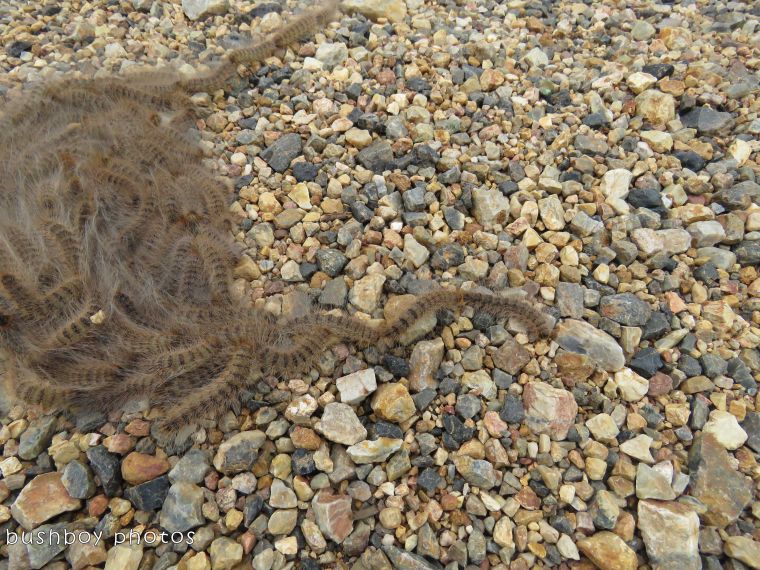 NOTE: Do not touch these caterpillars as they can cause a skin rash that can last a while.

NOTE: No caterpillars were harmed in this photo shoot

All those moments will be lost in time, like tears in rain!