It may be Winter, but here, it is the time when birds drop in on their way north to build their strength for the next part of their journey, or stay for the winter in the warm days on the North Coast. The nights can get cold but the days are usually in the low 20’s C with the warmth of sunshine and the number of plants that flower in late Autumn and Winter makes it a good place to stop off. This is not a complete record of birds as there have been birds who I haven’t managed to get in my lens plus there has been some who have just been to fast for me to photograph. Yes I have quite a number of photos of empty branches!!!

This first gallery of photos are the birds from my place.

The White-throated Honeyeaters arrive in the morning and in the afternoon with their chirp chirp chirp as they set about diving into the birdbath or pool to have their bath.

The Yellow-faced Honeyeaters arrive from down south, some stay while others in the flock fly further north.

The Blue-faced Honeyeaters come and go all year depending on what food is available. The Honey Gem Grevillea has finally started to flower after a long dry hot Summer. Look at the pollen dust on his head. 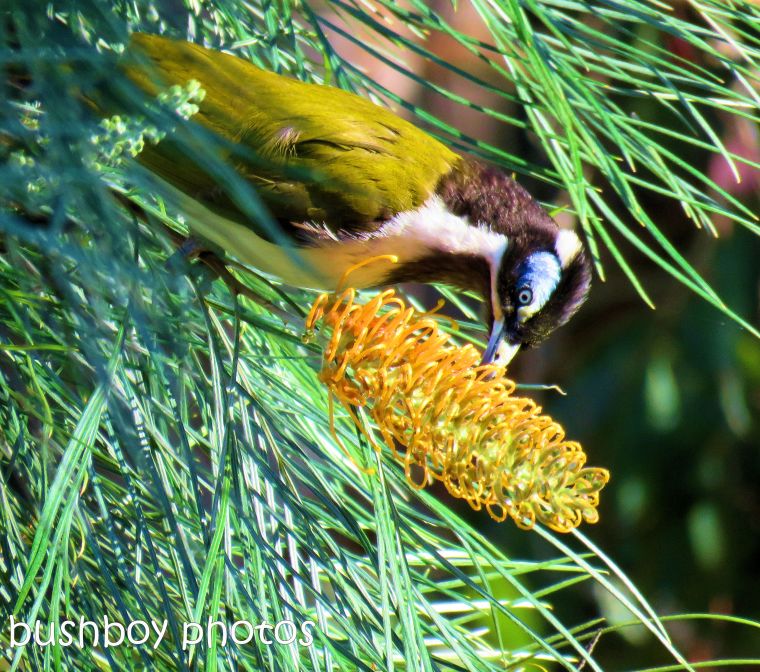 The little Eastern Spinebills are here with the distinctive clicking of their wings as they zip around the garden and their calls echoing in the gullies. 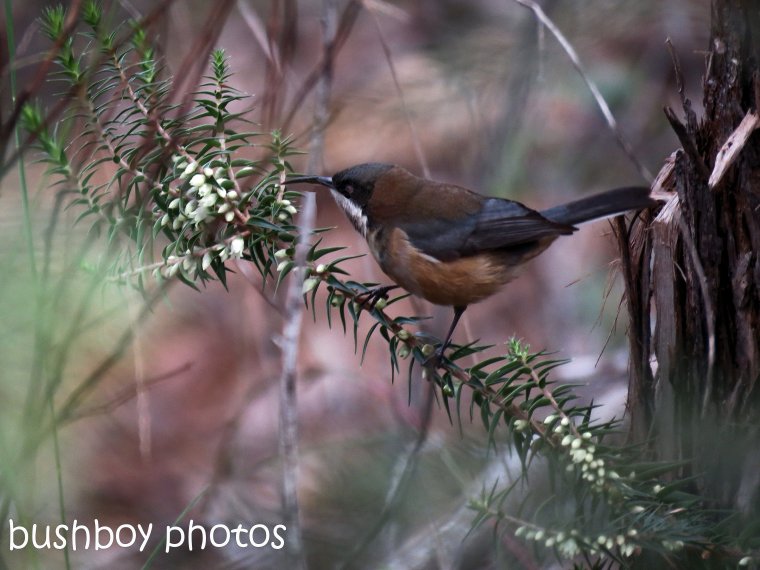 You can judge their size by comparing with the Blue-faced Honeyeater and Grevillea flower above. They really stretch to reach the blossoms at times.

Their plumage is quite pretty don’t you think?

I don’t include many photos of the female Golden Whistler but this one is so cute. They are around the place all year round with their repetitive call which can sound like a squeaky wheel, at times up to twenty single notes.

They also like to land on the side of trees and have a look around.

As do the White-throated Treecreepers who just hop up and down the trees looking for insects under the bark. They have a similar call to the Yellow Robins but not as persistent. 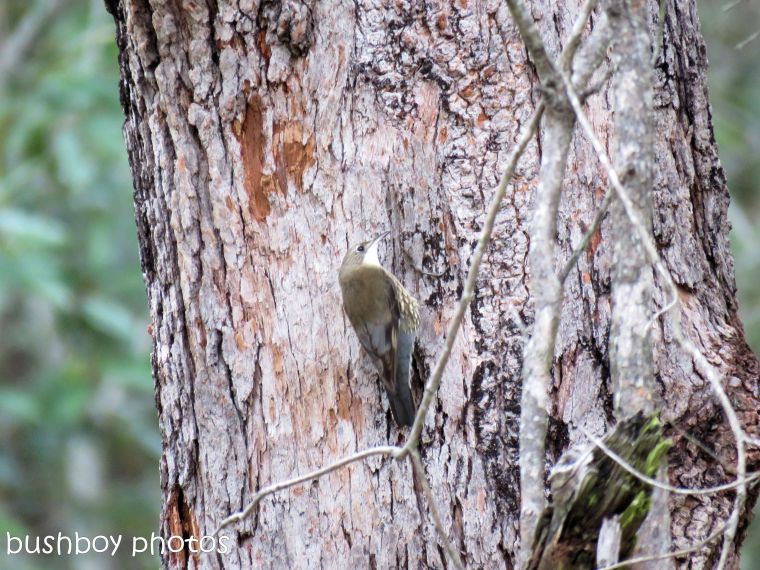 They also like to defy gravity as the give the trees a very thorough checking over.

The tiny Red-backed Fairy Wrens like to explore the lower parts of the forest eating grass seeds and insects foraging among the grass stalks. The Jenny Wren has good camouflage. 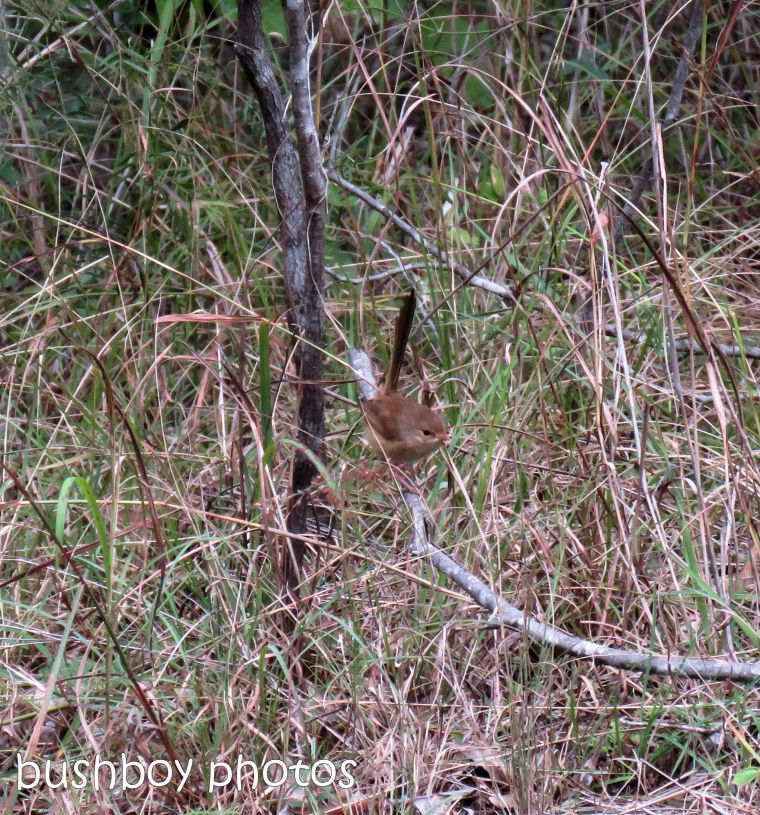 The Silvereyes are migrants who stop for a few weeks to gather their strength for their next leg of their journey north. 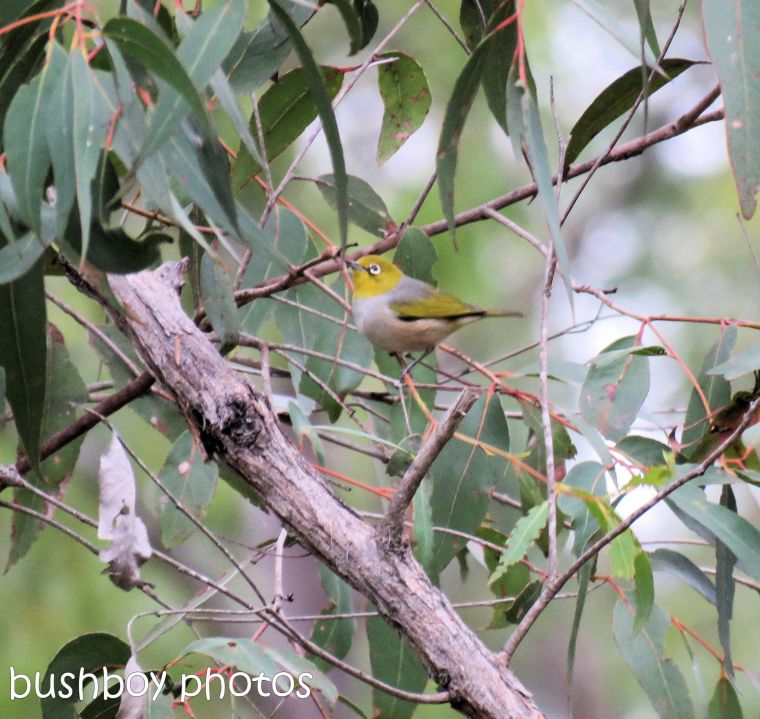 They are another of the tiny birds around here.

The Red-browed Firetails are another constant visitor to the bush as they move about in small flocks looking for grass seeds. This is a young one as the red brow isn’t as prominent as the adults.

The tiny Striated Thornbills are always around the garden and in the gullies around the house. 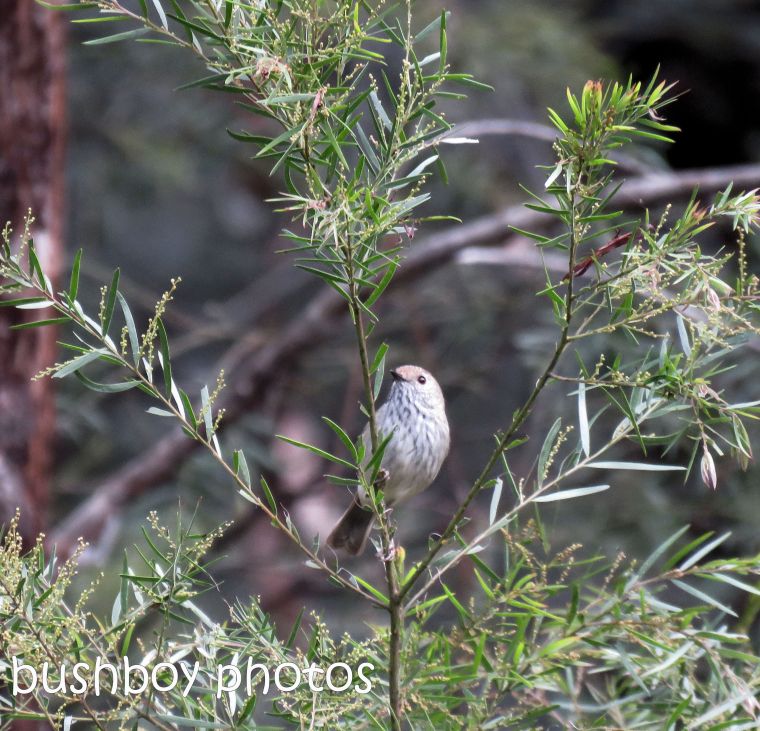 They love the birdbath.

Someone who I haven’t seen for quite a while has turned up this month and has been around the garden early in the morning and in the gullies during the day. The Spotted Pardalote digs a tunnel in the side of the gully to make it’s nest. They are so pretty aren’t they?

I think this one saw me as I snuck along the verandah for a better photo.

They can be quite vocal too. 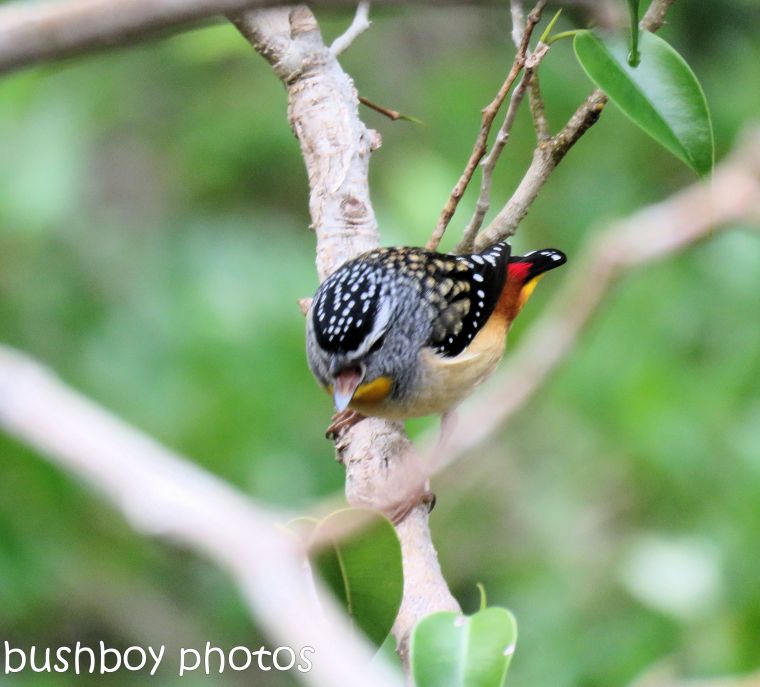 The sounds of Kookaburras signal the start and end of every day. There are about three families that live in the bush around the house and sometimes the cacophony of up to five or six Kookaburras can be quite deafening. 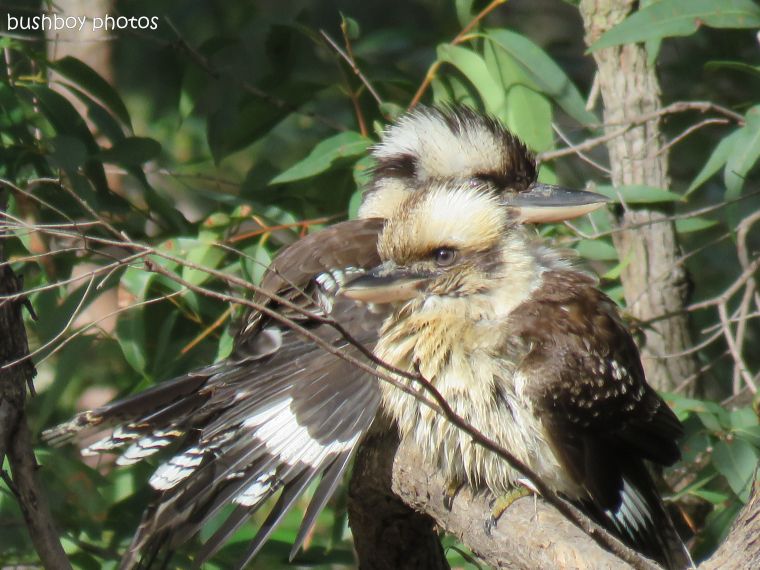 After I took this photo I noticed that there was another two sitting nearby in separate trees. All of a sudden they all flew off into the forest disappearing among the trees. 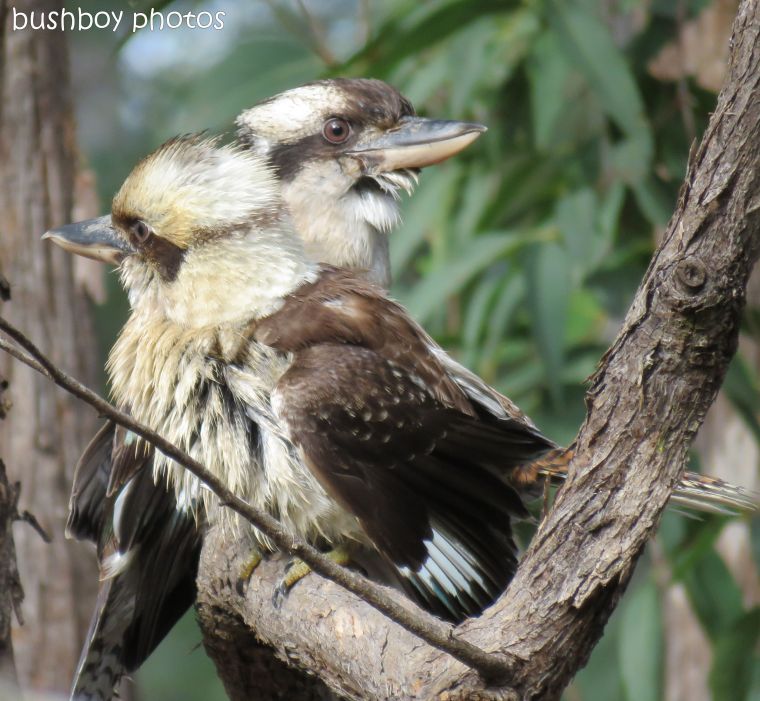 This next gallery are from my besties place.

The Lewins Honeyeater is the boss of my besties garden. They swoop on most other birds that dares to come into the garden. The Lewins at my place aren’t as bossy. 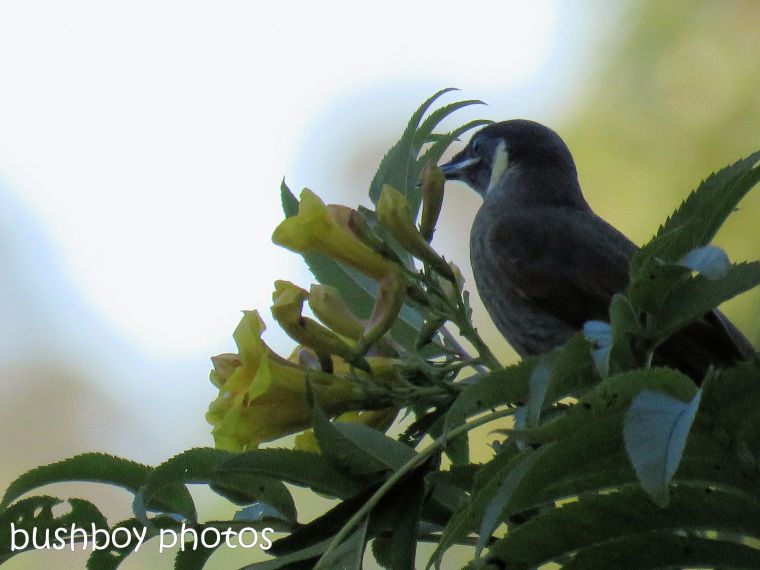 Can you spot the Varied Triller? 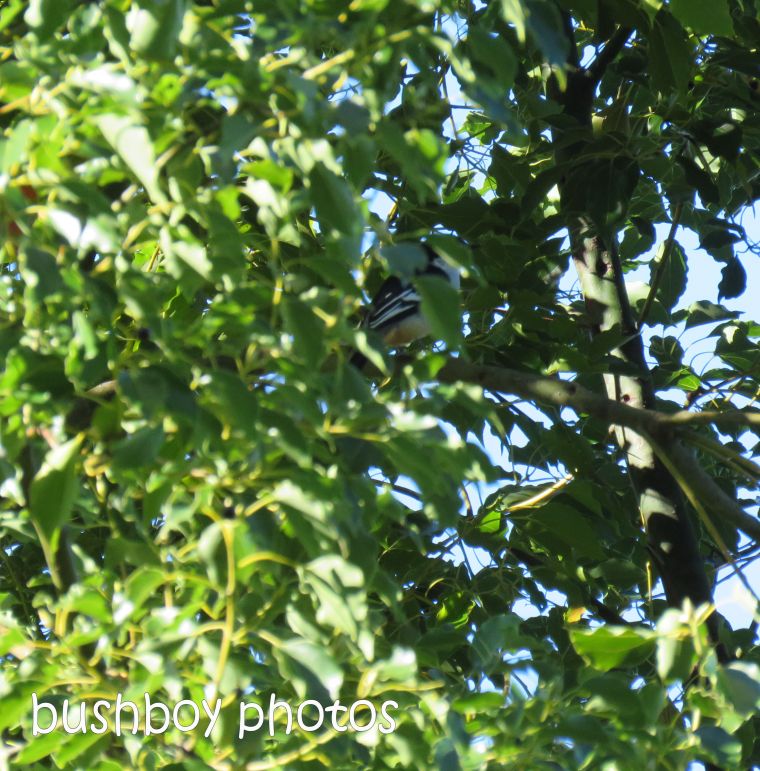 The Grey Fantails are always doing their acrobatic flying around the place catching insects on the wing. A very serious looking bird.

The Golden Whistler is always around the garden and nearby rainforest singing its lovely song.

My besties place is surrounded by rainforest so she has more doves and pigeons than I do at my place. The White-headed Pigeon has a deep sounding whoomp whoomp call. They also fly about in large flocks. 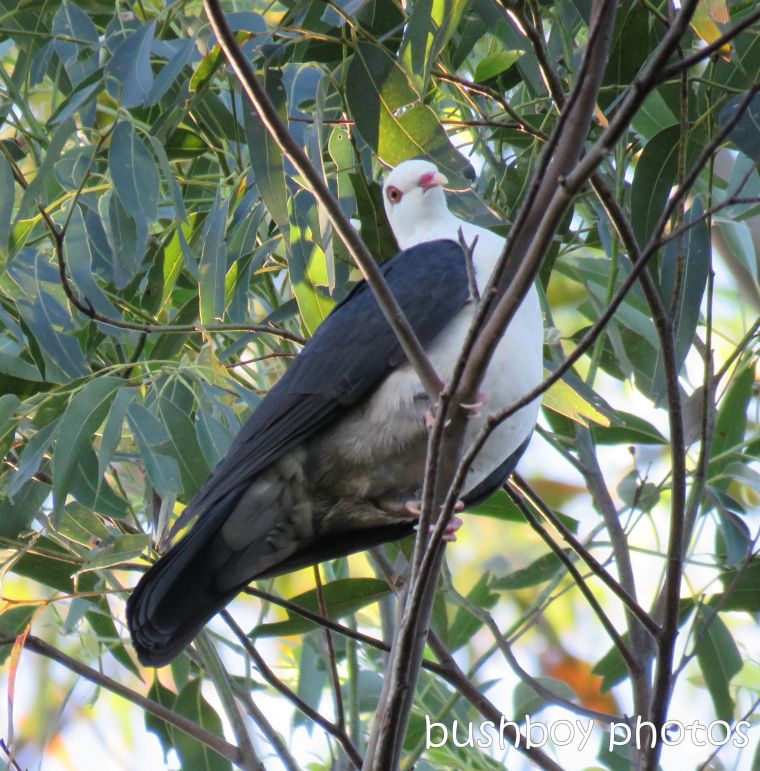 There is always up to ten bar-shouldered Doves foraging on the ground in the garden looking for pecans that have fallen from the tree.

The Whipbirds also enjoy foraging among the leaves for pecans.

While high in the trees the Figbirds look for seeds as well as pecans. This female Figbird found the seeds of an Umbrella Tree. 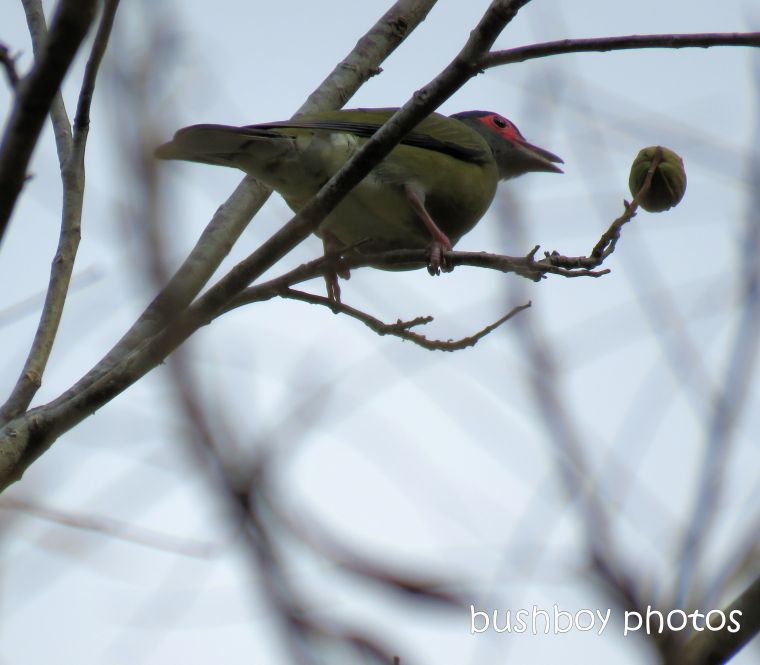 The Green Catbird is also interested in pecans. Not long after this photo was taken, so was the pecan.

Another recipient of the fallen pecans is the large Brush Turkey. His strong beak breaks open the pecans and often leaves small pieces behind for the other birds to eat. This one we call Brendan who has taken over the garden and has a mound nest almost one meter tall in the front garden. One day I’ll try to get a photo of Brendan and his mound. 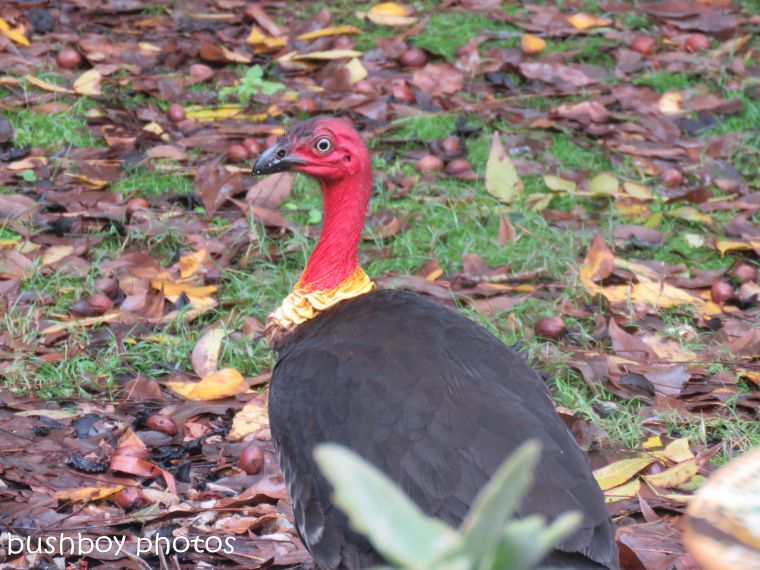 The most exciting discovery was finding a Regent Bowerbird just on the edge of the garden late one afternoon. I only managed to get a couple of bad photos but had to share in my excitement.

We went to Byron Bay one day to shop as we haven’t been for ages and Winter is a good time as the number of tourists is halved at least. The Golden Pendas are in flower and the Rainbow Lorikeets were having a great time screeching at each other.

And of course there are always chooks foraging around both our gardens. 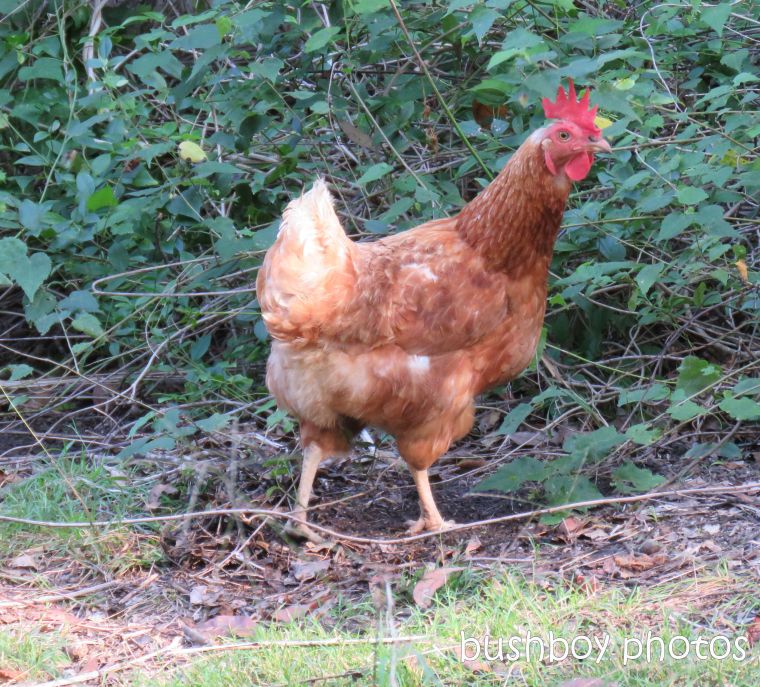 That is a snapshot of some of the birds around here in June. My June photo round-up probably won’t have any birds this year. Hopefully I’ll get to that by next week.

21 thoughts on “The birds of June”