Some things have been found so far this year that have not been in my view before, either been too deep in the bush or rainforest only to be heard or too quick for me to capture in the lens or just plain never ever seen before. Oh yeah, happy new year hope it has been a fun and wonderous 2014 so far.

When sitting around because it’s too hot to do anything outside or just having a cuppa on the verandah where a breeze cools and a bit of reading can be done in comfort. Everyone likes to catch that breeze. 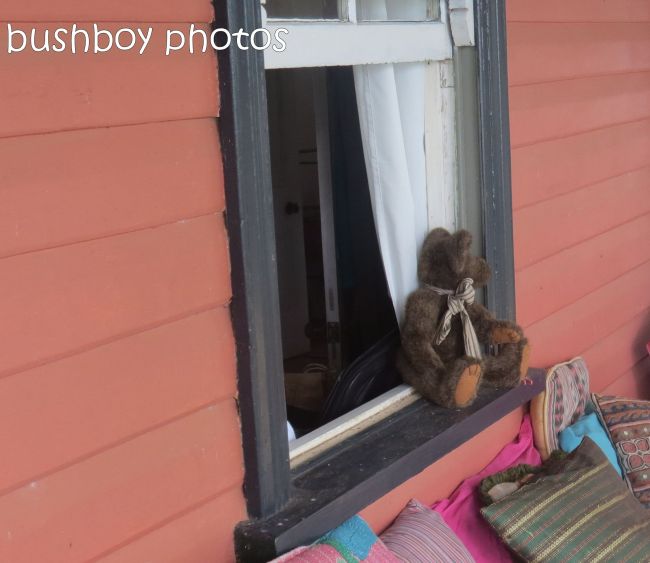 I always have one eye on the outside, catching any movement, big and small. Even when the temperature on the verandah boards is very warm underfoot, the ants still scurry about on their most important business. Occasionally they will stop. Probably to let their little feet cool or catch their breath. Then they are off again to join the constant stream going to and fro.

This bloke seemed to stop more than the others. 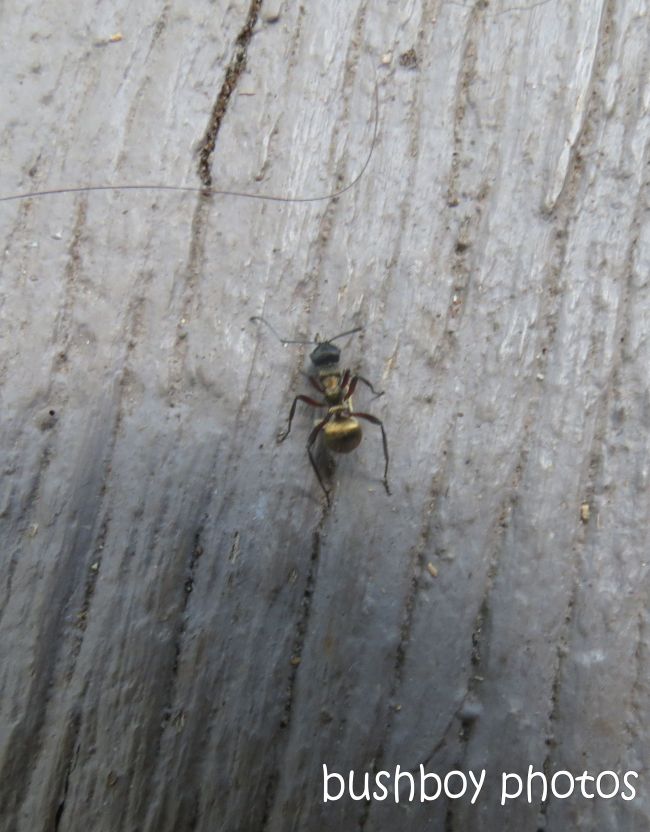 They look so golden when the light catches their tiny bodies. While the ants were trudging about, this weird blue flash kept going past me, landing on a verandah post, sort of half hopping and flying around and up and down. It finally decided to stop for enough of a millisecond for me to have a bit of a look.

The little blue bugs shadow sort of looks like an elephant don’t you think? In the mornings, among the small forest of coastal pines plants almost 100 years ago as a wind break, there is the strange calling of Catbirds. I have never been able to find them until this year.

While that one was preening, another was nearby having a bit of a call.

Ever heard a Catbird call. Listen here courtesy of Birds in Backyards  http://www.birdsinbackyards.net/species/Ailuroedus-crassirostris Later on in the day in another pine, a Wonga Pigeon was taking a breather out of the heat.

While at the bird bath it was almost not stop action…..OK, this was over two days but when it is warm, the birds love the birdbath not only for that refreshing dip to get a bit of water in all the right spots, but to have a cool drink. The most amazing thing was in the morning, all the magpie babies came for a bath at the same time. I have never seen so many young in the one spot. One of the parents came for a brief moment. Probably realised that it was the only adult among the kids and took off so it wouldn’t be the one that the young ones chased to beg for a snack.

It is always a family affair when the Red Browed Finches have a bath.

I can never understand why people want to have these wonderous little birds in cages.

I just love this photo.

IN the other bird bath, the Eastern Yellow Robin shot daggers at the Lewins Honeyeater when it just breezed in for a drink while the Robin was about to hop in for a good bath.

There is nothing worse than being followed inside by a March Fly. This one thought it was safe to follow me into the bathroom.

I was surprised that a spider that small would be able to hold on long enough to be able to sink the fangs. You can see the flys biting proboscis. Come to think of it, the spider is a wrestler and has the fly in a Step Over Toe Hold.

I came across this butterfly while down visiting Mrs Flowers.

It took me a while to work out it was a Tailed Citrus Swallowtail. It is an old butterfly and most of its tail is missing. You can just see the black and orange spots. There is usually three spots across the end of the wing. While we were there we picked some Davidson Plums.

Which went from that to this.

Just near the door the fuchsias have been blooming, such a pretty dainty flower.

I hope I can find a lot of different and new stuff this year.